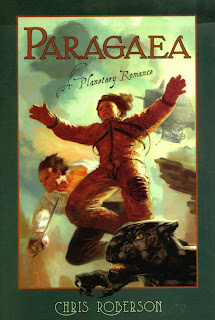 Hold on to your hats! When you open this book you are in for a rip-roaring, old fashion adventure in the tradition of Edgar Rice Burrough’s planet stories. Like John Carter of Mars, Soviet Cosmonaut, Akilina (Leena) Mikhailovna Chirikova finds herself deposited on the strange world of Paragaea after being sent through a worm hole. No sooner does she arrive then she is captured by mutated jaguar men and then just as quickly rescued by an Englishman named Heironymous Bonaventure of the Royal Navy. He served during the Napoleonic Wars and is also a refugee from Earth. He is accompanied by powerful black jaguar man named Balam, a deposed prince seeking to regain his crown.

Under Bonaventure’s guidance and tutelage, Leena reluctantly accepts her fate but is determined to find another inter-dimensional gateway that will take her back to her own world and time.

The three begin a danger filled journey across Paragaea where they encounter all kinds of creatures, travel in a magnificent aiship and ally themselves with an immortal android named Benu who may have the answers they seek. Their quest is a lively action filled romp that I enjoyed to the max and was sorry to reach the end all too quickly. It does end with several unresolved plots that I hope will be handled in forthcoming sequels. Heironymous, Leena and Balam are three of the best adventure heroes ever created and I’m so happy to have made their acquaintance. It’s an experience I’d like to repeat and soon. So will you.

Ron, I understand that Hieronymous Bonaventure is also the hero (sorry) of a Roberson novel called SET THE SEAS ON FIRE, which was publshed by Solaris Books last fall. I haven't read it yet, but it looks like it's set on Earth before his transition to Paragaea. How much before? I'll let you know.

Hi Bill. Right you are. After posting this review, I heard from Roberson and he told me about SET THE SEAS ON FIRE, which I certainly plan on picking up now. Oh, and he does have plans for sequel to PARAGAEA eventually, should sales on the book
continue to grow. Fingers crossed.

Characters from both Paragaea and from his novel Here, There & Everywhere will also appear in the forthcoming End of the Century, out in early 09.

Thanks for the heads up, Lou. I really like Roberson's writing a great deal and will be looking to add more of his work to my library. Thanks for stopping by.