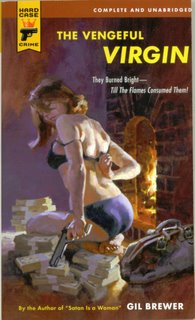 In 1958, the world at large was still in a Post-World War mode, both socially and economically. Things were good for Americans, if they wanted to get ahead and make their dreams come true. The same can be said for those darker forces of the human soul and the drugstore paperback racks of the time were jammed full of garish murder mysteries. One of these was THE VENGEFUL VIRGIN, a femme fatale genre tale by Gil Brewer.

Jack Ruxton is the first person narrator who spins this yarn of lust, obsession and murder. An army vet, he has settled in and opened up a very successful television repair shop. One day he is called to the home of furniture tycoon, Victor Spondell, to install a TV set in the man’s bedroom. Spondell is an invalid and being cared for by his eighteen year old step-daughter, Shirley Angela; a bored, sex-kitten ready for a better life. The second Ruxton lays eyes on her, the die is cast and the reader is all too aware of the road they will soon be going down.

From such classics as The Postman Always Rings Twice, the noirish tragedy of a good man done in by a bad woman has captivated readers and movie-going audiences. The fascination that keeps us turning the pages is trying to fathom where exactly the protagonist loses his way, his sense of right and wrong and then makes the fatal misstep that dooms him forever.Ruxton openly admits Shirley is not the most beautiful woman he’s ever met. Hell, he admits she’s still just a kid. Yet the second they recognize the mutual hunger in each other’s souls, can their sexual coupling be denied? Once he and Shirley have tasted each other’s passions, there is no going back. Ruxton wants Shirley to run off with him, but he also wants the old man’s money; all which Shirley inherits once he expires. But Spondell, in his present condition, could linger another five or ten years. Patience and waiting aren’t in the couple’s vocabulary. The sooner Spondell dies, the better and so they begin plotting his end.

As much as he thinks he has covered all his bases, Ruxton fails to take into account both his own ex-girlfriend and a very nosey neighbor. When one of them stumbles on the plot to kill Spondell, his well conceived plan quickly turns into a flimsy house of cards. Suddenly Shirley and Jack have blood on their hands and are on the run. The pacing of the book never lets up from page one and the further we are taken into Ruxton’s living hell, the more gripping the drama. I would dare anyone to put this book down once they’ve read the first half. Compelling to the bitter, surprise ending is how to best describe THE VENGEFUL VIRGIN. It is a small, quickly read book, but one that will stay with you long after you’ve put it down.

I read this recently, a fairly by the numbers book. I felt like I'd read it before.

Glen, considering ALL reading you do, I think it's perfectly conceivable you did read this book before. Ha.
Ron