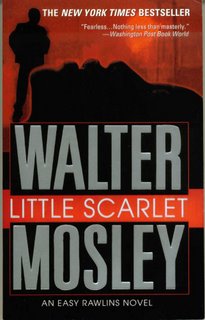 Back in 1990, Walter Mosley introduced Ezekiel “Easy” Rawlins to the world of crime fiction in his novel, DEVIL IN A BLUE DRESS. It was an instant best seller, as Mosley quickly established himself as the heir apparent to the likes of Dashiel Hammett and Raymond Chandler. Like them, he set his series in the heart of the gold coast, . Unlike them, Mosley’s hero was black and immediately the entire noir-private eye genre was set on its ear.

Having Hammett’s gift for storytelling and ’s social consciousness, Mosley’s stories followed Easy’s life upon his return to after having fought in World War II. He’s a kind, and giving man, who wants very much to belong, to be a part of something good. That he attracts society’s misfits and ends up caring for them, is part of what makes Easy likeable to his readers. He’s the kind of man we would all like to have as a friend. Over the past 17 years, Mosley as led invited us along Easy’s life path, and with each new novel, this is number nine; he has also taken us through the history of the 20th Century.

LITTLE SCARLET begins only hours after the tragic Watts Riots of Los Angeles back in the summer of 1965. Amidst the destruction and looting, a young black woman is murdered and the police believe it is the work of a white man. Fearing this will reignite the cauldron that is the black community, the police come to Easy and ask him to investigate privately. In doing so, Easy, for the first time in his life, begins to question his own attitudes and feelings about prejudice and racism. To his credit, he begins to realize the time has long past for taking a stand and ending the slavery-mind-set still chaining the souls of his people. That he also faces his own reactive racism towards whites is a deft, and wonderful revelation Mosley handles openly with truth and sensitivity.

The changing political and social scene of the country is changing. Civil Rights are now more than just platitudes and wishful thinking and Easy must come to grips with the future or be forever locked into the blind hatreds of the past. From the rich neighborhoods of to the homeless shelters of , the killer’s trail leads him on a journey unlike any he has ever traveled before.

I truly enjoyed this new entry in the Easy Rawlins series and do recommend it, but with a caveat. To truly appreciate what is going on here, the reader should start at the beginning
and follow Easy right from the start. You can enjoy LITTLE SCARLET on its own, as a fine mystery. But you would be missing the rich dessert the entire series offers as a whole. And that would be a crime.