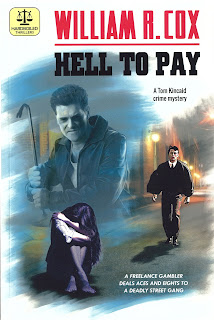 William Robert Cox (1901 – 1988) was a veteran pulp writer who wrote in various genres. His most popular were crime/mysteries and westerns. Among the several series he created, the Tom Kincaid are among the most memorable. The set up was pure tough-guy pulps. Kincaid is a World War II veteran eking out a living in New York City as a professional gambler. In that line of work, he often crosses paths with both mobster and cops of all varieties.

When a group of supposedly disaffiliated young hoodlums begin attacking mob backed establishments and gambling parlors, Kincaid somehow finds himself in the middle of the conflict. For whatever reason, one of the vicious young Turks named Wysocki, has signaled him out in the belief he is part of the Mosski syndicate. Which then puts the gambler under the scrutiny of that particular boss. In his attempts to keep himself neutral, Kincaid finds himself the center of violence from both sides.

As if that isn’t bad enough, someone close to Kincaid is brutally murdered and he realizes those close to him are all possible targets of the mystery figure controlling the murderous punks. Unless he can uncover the hidden mastermind’s identity, the prospects of his future are getting worst by the minute. And those are odds no gambler is ever willing to accept.

“Hell To Pay” is a classic 50s-60s pulp story. Cox’s vocabulary echoes the slang of the concrete jungle in a savage style of poetry that made his fiction unique.