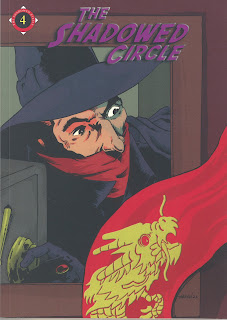 What a delight to get this new issue in the mail recently. As ever the articles are so much fun and all of them contributed by true Shadow fans. Both Will Murray and Tim King hunt for whatever origins may have led Walter Gibson to come up with the name B. Jonas as the “drop box” for his New York City agents. It’s fascinating to see how each writer approaches this mystery from different points.

This was followed by several articles in regards to the Shadow in comic books. Although we didn’t completely agree with Todd D. Severin’s conceit in regards to the character’s overall importance to the four-color media’s history, we found his facts both fascinating and informative. Whereas Daryl Morrissey piece on the comic book team up of the Shadow and Doc Savage was a wonderful trip down memory lane as we proudly own all the issues referred to in the article.

The second of half Michael Uslan’s interview was very comprehensive dealing with the various aspects of his involvement with classic pulp and radio heroes. Then we have the finale of the issue which was a hoot. John Olsen, working from the actual radio script, narrates the final Shadow episode which aired on December 26, 1954. He does so with such panache, it was easy to imagine the actual show itself, with the actors playing their part against the haunting mood music background and nerve shattering sound effects.

Finally a tip of our pulp fedora to the artists who graced this issue. From the cover to the interior illustrations, each delivered amazing drawings.

“The Shadowed Circle” has proven to be the finest fan publication on the Shadow ever produced. ‘Nuff said?