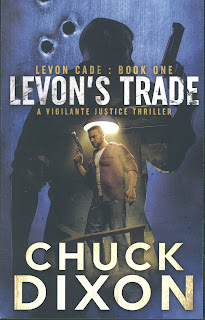 A little over a year ago, Chuck Dixon sent us a copy of his novel “Levon’s Time,” the seventh in this series about Levon Cade, an ex-Marine who crosses paths with lots of bad people; much to their woes. We’d been aware of the series, but hadn’t had the opportunity to check it out. The best way to describe Levon Cade is pretty much a redneck cousin to both Jack Reacher and Mack Bolan. He’s a good man, a patriot and devoted father. Delighted with that book, we picked up volumes eight and nine as they were published. Becoming enthusiastic fans, we put on the breaks. Before going any further with this character, it was high time we went back and started at the beginning. Thus we attempted to purchase Volume One from Amazon only to discover it wasn’t available.

We dropped Dixon an e-mail to that fact and he was surprised. Come to find out, Amazon had screwed up, and book one should have been listed as available. He wasted no time in correcting that snafu. We in turn immediately ordered Volumes One and Two. And here we are with this review. Readers should understand, regardless of my friendship with the author, my reviews are based solely on the book’s quality. If a book stinks to high heaven, we simply don’t review it. The world has enough junk in it without us adding more.

“Levon’s Trade” is a power packed action thriller that hits the ground running. We’re introduced to Cade, a widower whose wife died of cancer and left him with a 7 year daughter named Merry (short for Meredith). She is living with her maternal grandparents who are suing the courts for full custody. Their argument is that Cade suffers from PTSD and is a danger to the child. Of course the claim is bogus, but the grandparents are wealthy and will use that wealth to forestall the court’s verdict until Cade can no longer to afford to contest them. In short, he’s in desperate need of quick cash.

Which is where the plot intertwines with Job Bob Wiley, a rich construction entrepreneur whose daughter, Jenna, has vanished without a trace while on Spring Break in Florida? Tampa police come up empty in their investigation and an anxious Joe Bob believes his daughter has been kidnapped. Suspecting Cade’s mysterious military background might have included special ops, Wiley offers him five thousand dollars to go and find his girl.

From that point on, Levon Cade becomes a ruthless manhunter trained by the most efficient military force in the world, the U.S. Marines. In no time at all, he picks up the trail leading to several criminal networks made up of foreign immigrants who consider American law enforcement agencies amateurs. Not so Cade. He’s a one man army they can’t stop. “Levon’s Trade” is lean in its prose, Dixon never wasting a single word to tell his story. One scene races into the next until the gun blasting climax explodes across the final pages. It’s a fantastic debut of a truly great action hero.

Do yourselves a favor, dear readers, don’t make our mistake and wait to discover him. You’ll only regret it in the end.  Now onto book two.