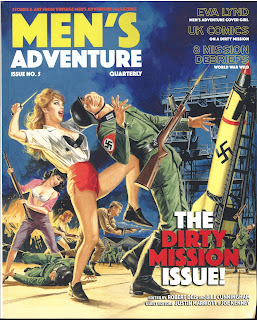 Issue 5 of this terrific magazine arrived like a 4th of July rocket-blaster. Jammed packed with the usual assortment of informative articles and awesome illustrations, we didn’t waste a second digging into it. The visual prize this time was the Eva Lynd pictorials, both actual photographs of this one time model/actress and the MAMS’ drawings they inspired by the leading artists in the field. Photo after photo followed by dozens of bright cover reproductions were wonderfully compiled. It was also nice to see modern day pin-up model, Mala Mastroberte’s own redone pulp covers wherein she inserted herself in the images via photo-shop magic.

This issues’ fiction theme was “Dirty Missions” suggesting that movies like “The Dirty Dozen” had a big impact on MAMS. It was clear they inspired many exaggerated tales of daring, secret missions mixing fact and fiction all adhering to the MAMS’ formula of tough-as-nail action heroes battling alongside enticing, bodacious female freedom fighters. There’s a great article on British war comics by Justin Marriott and a second introduction piece by Joe Kenney relating how he discovered both golden age comics and MAMS in his father’s barber shop at a young age. That struck a chord, as this reviewer grew up in the 50s and our neighborhood barber also owned a huge collection of Golden Age comics. We discovered so many incredible heroes on those worn comics from Plastic Man to Captain Marvel.  As for the MAMS, we never really paid them any attention until getting out of the army in 1968.

There are nine “dirty missions” reprinted in this volume and each delivers what MAM readers expected; wild, incredible stories featuring go-for-broke Yanks taking on sadistic Nazi butchers.  MAMS were literary junk food for World War II vets and its see easy to see with this new edition of Men’s Adventure Quarterly the why of that. Hats off to editors Bob Deis and Bill Cunningham for hitting another one out of the park. Keep’em coming, gents. This is the good stuff.