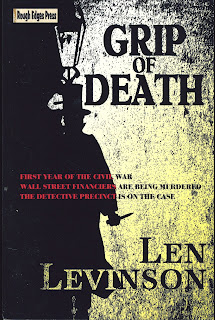 Set in New York City in the turbulent year after the start of the Civil War, Levinson’s story revolves around a group of Southeners known as the Chivalry who hatch a plot to cripple the North’s economic strength. Their goal, to murder the wealthiest New York financiers and frighten off others from supporting Lincoln’s campaign.

Fate intervenes when Deputy Chief of Detectives, Timothy Flanagan, hires two new detectives on the same day. The first of these is Derek Lancaster, an intelligent, well-to-do blue blood whose patriotic duty resulted in his being wounded at the Battle of Bull Run. Now discharged, he wants to join the Secret Service and continue his fight to abolish slavery. Sadly he’s rejected for lack of investigative experience and thus turns to the City Detective Department. Flanagan’s second recruit is a lovely young lady named Catherine Satterfield, formerly of South Carolina. Rebelling against her stubborn father, Catherine had been sent to a girls’ school in London just prior to the war. There she falls in love with the theater and acting. Upon her return to the states, she hopes to find work as an actor but instead, crosses path with the veteran copper.

Seeing the potential in both Lancaster and Satterfield, Flanagan has them team up and begin the investigation of the murdered business man, Amos Symington. From that point on, Levinson’s story takes on a life of its own. Brilliant at capturing both he wonder and squalor of New York at the time, his setting is historically authentic and it breathes added weight to the challenges Lancaster and Satterfield must overcome to solve the mystery. Levinson skillfully weaves his fictional players with historical characters such as Horace Greely, John Wilkes Booth and a hack driver named Bonney, whose son will one day become a legend out west.

Like most veteran pulp scribes, Levinson economy of words is so efficient. He paints pictures fast as easy, as the drama unfolds. From the sweet prostitute caught up in conspiracy beyond her comprehension to the runaway slave trying to find his own place in a frightening new America. They crisscross the stage propelling the plot ever forward to a truly satisfying, marvelous finale. “Grip of Death” is both a thriller and history lesson in one, with Levinson’s cold hard prose. One should never attempt to change history as it is a folly reserved only fools and politicians.