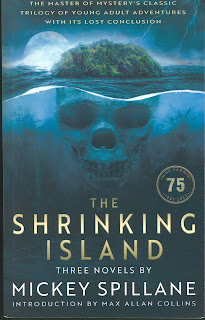 Vincent Demar and his son Larry move to the Caribbean Island of Peolle to start a new life. Upon arriving they make friends with islander Tim Toomey and his son Josh. Soon the two teenage boys are inseparable and ready for whatever adventures may come their way. Enjoying what are primarily three Young Adult novels produced by a world famous tough-guy private-eye writer is just more proof on how versatile and talented Spillane truly was. Whereas since his passing in 2006, literary history has relegated him to the narrow confines of mystery and crime thrillers choosing to ignore the incredible amount of work he created in all kinds of genres from westerns to horror and yes, even Young Adult.

This book collects “The Day the Sea Rolled Back” and “The Ship That Never Was,” the two previously published Larry and Josh stories along with “The Shrinking Island.” Published here for the first time. Reading these, we immediately see the formula the author established. Much like all traditional young adult stories, Larry and Josh become new versions of the Hardy Boys only with an exotic Caribbean background. As each tale opens, they come across some bizarre mystery, set out to explore it on their own, then become the targets of unscrupulous men seeking a long lost treasure and put the boys in jeopardy.

In “The Day the Sea Rolled Back” the boys deal with a natural phenomenon wherein the sea actually rolls back exposing several miles of sea bottom around the tiny islands; never before seen real estate with several sunken ships now visible to all. With “The Ship That Never Was,” Larry and Josh discover an old sailor adrift in a hundred year old British longboat that could only have come off a classic British frigate. All of which leads to the strange history of what was considered a jinxed boat. And finally, with “The Shrinking Island,” our impetuous duo encounters a supernatural force straight out of an issue of Weird Tales.

This is a fun package and having enjoyed them, we can only bemoan the fact that Spillane never wrote any others. Larry and Josh are terrific characters and it would have been fun to see where the series might have gone. That we’ll never know, but at least we now have this volume. A tip of the pulp fedora to Rough Edge Press and writer Max Allan Collins who offers up a terrific introduction.