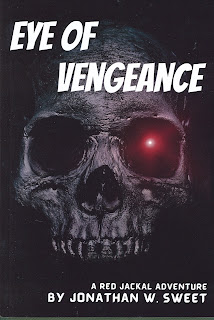 The Twin-Cities rouge colored adventurer returns in a full length adventure that pits him against a mysterious criminal mastermind known by various names. For whatever nefarious reasons, publisher Blake Randolph’s secret crime-fighting persona has become the target of the sadistic villain who begins his campaign by systematically murdering the Jackal’s agents. Then the devious crook sets up an elaborate weekend getaway for half a dozen of the city’s elite personalities to a luxurious woodsy island retreat. There, one of fiend’s twisted killers, dressed as the Red Jackal, brutally murders several of the guests so as to put the blame on the battling avenger.

Never have the stakes been higher. As he attempts to uncover the identity of his obsessed foe, the Red Jackal begins to worry that his closest confidants, to include his brother David, police Lt. McDaniels and the lovely reporter Jennifer Jones, may become the madman’s newest targets. Once again, writer Sweet spins a fast paced tale set against authentic backgrounds and history to deliver a truly rewarding tale. This being the character’s third outing, we’re totally bonafide and hope there’s a fourth soon on the way. The Red Jackal is what good New Pulp is all about.