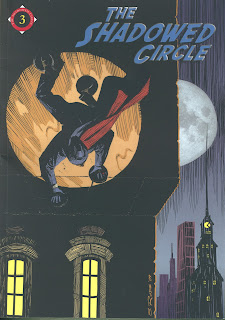 Once again, Editor Steve Donoso and his crew of enthusiastic Shadow devotees have put together another stellar issue cram-packed with informative and fun articles. All behind a terrific cover by Steve Rude.

Albert J. Emery’s query as to could the Shadow have ended World War II by taking out Hitler is thought provoking. Todd Severin and Keith Holt’s second part of the character’s history was professionally put forth. Will Murray always entertains, whether when writing his own exciting pulp tales or in this case, recounting his personal experiences covering the 1994 Shadow movie starring Alec Baldwin. His peek behind the glamour and glitter is fascinating.

Our favorite article was easily the story behind “The Shadow’s Guy in the Chair.” As writer Tim King points out, in most series where the hero leads a team, there is always someone at the center of the web cleverly doing the boss’ bidding. With the Shadow it was the loyal and mysterious Burbank. A fun piece exploring the possible origins of the character as created by Walter Gibson.

Part one of the Michael Uslan interview, “The Boy Who Loved The Shadow” by Darby Kern was enjoyable and we’re eager for the second half coming next issue. Likewise Steve Novak’s piece on the Shadow’s New York was a nice follow up from the period photo-essay on display in Issue # 2.

Finally, “The Puzzling Adventures of The Shadow Magazine in Canada was really strange to say the least. Kudos to Tim Hewitt for his research and exploration of a little facet of publishing history before and during the years of World War II. Very little is ever written about Canadian pulps and this feature was most welcome.

Once again, “The Shadowed Circle” offers up a truly complete package with entertaining articles all beautifully laid out with clever compositions throughout. No Shadow fan should be without this wonderful mag.