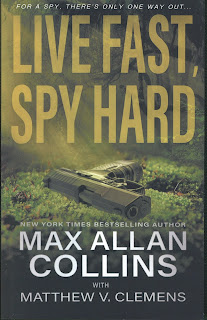 The 60s spy-vibes continue in this second John Sand adventures that proved to be so much fun in the first. For those who came in late, John Sand is the actual British agent who inspired the highly popular 007 character that so enamored President John Kennedy, launched a multi-billion dollar movie franchise and tons of literary imitators. Whereas that very notoriety forced the agent into retirement; a not unpleasant affair as it was helped along by his marriage to the beautiful and rich Texas oil heiress Stacey Boldt.

In the prelude to this new chapter, Collins and Clemens go back in time a few years and not only show us their first meeting but also the brutal murder of Stacey’s father, Dutch Boldt, at the hands of his business Jonathan Lonestarr; a death swiftly avenged by the former British spy. Now into their second year as happily married couple, John learns that Lonestarr may still be alive. If true he poses a real threat to both of them. But as a civilian, his access to information sources is severely limited and before he can either confirm or discredit the rumor, Stacey goes missing while on a business trip to Brownsville. Sand immediately goes off in search of her. Thus begins a violent odyssey that will take him from Mexico, to Los Vegas, Acapulco and end on the lush Caribbean island of Curacaos.

Along the way he will survive a deadly street ambush orchestrated by an American mob boss, be recruited into a new top secret spy network, and reconnect with an old flame amidst a brutal betrayal that results in the kidnapping of his former Boss from M16. As ever Collins and Clemens keep the pace moving rapidly while at the same time offering more twists and turns than a dirt road through the backwoods northern Maine. Oh, and did we mention among Sand’s helpful contacts is former colleague who wrote the bestselling thrillers and a certain well known American cowboy movie star? No worries, we won’t spoil the reveals.

While reading “Live Fast, Spy Hard,” we had the feeling that with this second entry, the authors had not only given us a half dozen scenes that purposely echo specific movies moments we’re all familiar with, but Sand’s own personality began to take on a very distinct Sean Connery voice and by the climatic ending, we could easily envision his cool, cruel smirk playing across his lips at what is to come. Another winner from a team that never misses a beat.