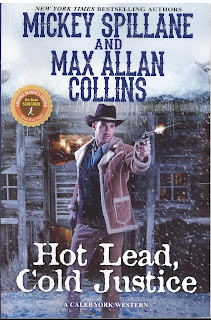 With the fourth novel in this series, Max Allan Collins puts his hero, gunslinger turned Sheriff, Caleb York, up against a vicious gang of outlaws while at the same time dealing with the disastrous winter blizzard of 1887. The latter, a freakish storm that destroyed farms and livestock was later labeled by historians as “The Great Die-Up,” so impactful was the event that it forever altered the course of western ranching for decades to follow.

Against this brutal setting, Burn’Em Burnham, a former member of Quantrill’s Raiders, arrives in Trinidad, New Mexico to finalize his plan to rob a bank in nearby Los Vegas. Advantageous to the outlaw leader, one of his former crew has reformed and is operating a saddle and leather goods store in the fast growing little town. Burnham offers to cut the merchant in for a share of the loot if he’ll allow Burnham and his three men to hideout in his quarters above the shop. The former Confederate soldier’s strategy being after the bank job, most of the local lawmen will assume the robbers would head south to Mexico. None would ever imagine them going north to lay low in Trinidad.

All of this seems carefully strategized until two unexpected variables arise. The first is discovering that York is the sheriff of Trinidad. It was York who’d sent him to prison ten years earlier. The second is the unforeseen blizzard. Both ultimately affect the gang’s fate and those of many innocent people caught in their path.

As always, Collins weaves a masterful tale filled with action, suspense and tragedy. Though is west is anchored in the memories of many classic Hollywood horse-operas, it also makes use of the unvarnished historical facts thus combining the two to create a unique and memorable story. Honestly, his vivid description of the white snowy hell that descended upon the plains had this reviewer blowing on his fingers as he turned the pages. Collins remains a master yarn-spinner and this book proves it.

Do you understand there is a 12 word sentence you can tell your partner... that will induce intense emotions of love and instinctual appeal to you buried within his chest?

That's because hidden in these 12 words is a "secret signal" that triggers a man's impulse to love, adore and protect you with his entire heart...

This impulse is so hardwired into a man's genetics that it will make him work better than before to take care of you.

Matter of fact, triggering this all-powerful impulse is absolutely binding to getting the best ever relationship with your man that as soon as you send your man one of these "Secret Signals"...

...You will soon find him expose his mind and heart to you in such a way he never experienced before and he will perceive you as the only woman in the universe who has ever truly tempted him.

Do this hack to drop 2lb of fat in 8 hours

More than 160000 men and women are losing weight with a easy and secret "liquid hack" to burn 1-2lbs each night as they sleep.

It is very easy and it works all the time.

This is how you can do it yourself:

1) Take a glass and fill it up half glass

2) Now use this crazy HACK

and you'll be 1-2lbs lighter the next day!