DEAD JACK and the Pandemonium Device 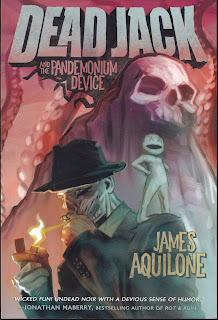 Every now and then we are introduced to new writer who proves New Pulp fiction is alive and well. Such a writer is James Aquilone and his first novel is a rollicking trip down weird twisted roads unlike anything we’ve ever encountered before. Aquilone has created a madcap world where all manner of bizarre creatures of fantasy exist side-by-side in mirror-like reflection of our own staid and recognizable reality. The world is called Pandemonium and it has five cities; ShadowShade, The Red Garden, Monster Island, Witch End and The Broken Lands. All of them situated in the Broken Sea.

But before we get too far into all this, let’s explain the origin of Pandemonium. During World War II the Nazis recruited three of the greatest wizards of our world to aid them in winning world war. Unfortunately one of these three attempted to betray the other two and in the ensuing conflict a rift was opened into another dimension. The renegade wizard, along with lots of other innocent folks was thrown into this alternate existence that is Pandemonium.

One of these unlucky chaps was a dead private eye named Jack and upon arrival into his new crazy world, he became an animated zombie. Thus it was only natural, or should we say unnatural, that he soon became Dead Jack, the best private detective in ShadowShade. Along with Lilith, his ghost secretary, Dead Jack has a mini-sidekick named Oswald. Oswald is a homunculus which Webster’s Dictionary defines as “a little man, dwarf, manikin.” Imagine the Pillsbury dough boy brought to life with the ability to change his shape at will and that’s Oswald, though a little less cute and a whole lot weirder.

Now Dead Jack does his back to live harmoniously with his fellow denizens and that means keeping his zombie eating habits under control. He does this by ingesting pixie dust, Pandemonium’s version of our own opiates. As the story opens, poor Jack slips and eats a thuggish leprechaun thus forcing him to feel his victim’s angry clan. He and Oswald end up in the hands of the Goblin Queen who is in need of Jack’s services. Unknown forces have kidnapped 52 of Her Majesty’s beloved black cats and she hires the pair to find and return her feline pets.

Why would anyone in Pandemonium steal 52 cats? As Jack and Oswald investigate they slowly begin to fathom a much more dangerous conspiracy at work; one that could bring about the total destruction of Pandemonium and all its inhabitants. But can this inept duo solve the puzzle in time, unmask the real villain and save their eerie-wacky world? Writer James Aquilone doesn’t spare a pun or warped joke along the way as he puts his really charming dead hero through his paces in one of the most enjoyable adventures we’ve ever read.

“Dead Jack and the Pandemonium Device,” is an original romp that never lets up from start to finish. And if that weren’t enough, there’s the bonus of two extra features at the back of the book. We’d also be remiss in not applauding the book’s design, the gorgeous cover by Colton Worley. Then, unlike most New Pulp publishers, we’re offered two beautiful interior illustrations by artist Ed Watson. Our only gripe – why just two? This book begged for more.

Final thoughts, James Aquilone is a new voice in the New Pulp community. One you need to support big time!
Posted by Ron Fortier at 1:12 PM