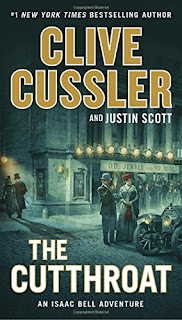 We’ve been fans of this series since first created by Clive Cussler and then picked up by Justin Scott. These are historical action packed stories of a turn-of-the-century Van Dorn detective Isaac Bell and accurate settings and history are as much fun as the adventure stuff. With “The Cutthroat” Bell and his confederates uncover the startling truth that a serial killer has been active in the US for nearly twenty years. The more they begin collecting data from across the country, one similarity continues to rise prominent in all the various police reports and newspaper accounts; the murders are highly reminiscent of London’s notorious Jack the Ripper killings.

Considering the fact that the Ripper was never apprehended, speculation arises as to the possibility that the fiend ended his reign of terror in England because he escaped to America. As outlandish as the idea seems, Bell is determined to solve the case and travels to England to re-examine the Ripper’s crime history. Ultimately creating a feasible timeline, the savvy manhunter comes to the conclusion that had the Ripper committed his crimes while in his early twenties, the idea of his coming to the US and continuing his evil ways is not only possible but with the mounting evidence gathered by the Van Dorn agents, highly probable.

Set against the backdrop of flamboyant American theater groups in the early 1900s, Scott weaves a mesmerizing, suspenseful tale that had this reviewer turning pages late into the night. “Cutthroat” is a gem in what is already a great series worth of any pulp lovers support.
Posted by Ron Fortier at 7:18 PM