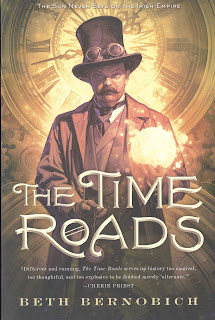 And that’s only the first half of the book.  “The Time Roads” is a complex, enthralling tale filled with amazing characters all struggling to find their places in an ever changing cosmos. Despite the uncertainty of each new future that challenges them, they learn to rely on the inner strength that is their true, immutable constant. That human love and loyalty, despite their many failings, will in the end triumph. A tip of the pulp fedora to Beth Bernobich for a truly unforgettable adventure.
Posted by Ron Fortier at 11:20 AM