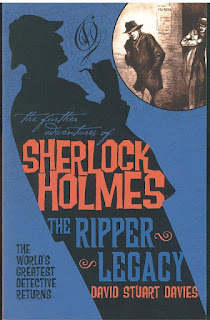 The book has plenty of suspence and action as our heroes are never at rest, though the murderous villain they battle has the uncanny ability to stay one step ahead of them throughtout the entire adventure. Another vital aspect of any Sherlock Holmes tale is how well the writer captures the essences of these beloved figures. Again, Davies is truly wonderful in his portrayals. These are Doyle’s character as we’ve all come to know and love them.  “The Ripper Legacy” is a damn good read. Don’t miss it.
Posted by Ron Fortier at 10:57 AM