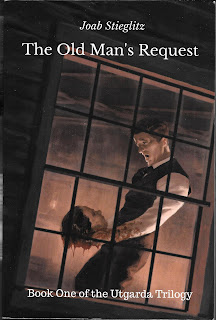 In the summer of 1929, three people are summoned to the hospital by an ailing college professor. Fearing his time is short; Prof. Jason Longborough confides a terrible secret to his prorge, Anna Rykov, a Russian anthropologist, Dr. Harold Lamb, a general practioner and Father Sean O’Malley, a Catholic priest versed in the church’s exorcism rituals. Fifty years earlier, Longbrough, then a college student, and several friends, made the foolish decision to dable in the occult; the end result being they actually summoned a horrific demon named Urgarda. Trapped in our world since that time, the shape-shifting monster has kept his existence secret by murdering those with any knowledge of presence.

The old professor realizes it is his responsibility to somehow re-summon the demon to the abandoned farmhouse where he first appeared and there destroy him. The task is too difficult for one person and thus Longborough brings his three young colleagues into his plans. But time has run out for the guilt ridden teacher and after relating his wild story to the trio, he dies.

Initially all three question whether the old man’s tale was factual or the rantings of a failing mind. Still, to ignore it would have serious consequence; chief among these allowing the demon to continue his evil machinations in our dimension. Bit by bit, each of the three begin to accept the mission that has been foisted on them and the real horror it portents. Having no other recourse, it is up to them to carry out Longborough’s final request and confront the beast.

Joab Stieglitz offers up a really well crafted thriller filled with enough suspense and action to adroitly move his plot along.  Anna, Dr. Lamb and Father O’Malley aren’t superheroes, but rather good people caught up in an affair far beyond anything any of them had ever experienced before. It will take all their courge and mutual trust in one another to summon the demon and defeat it. If that is even possible? “The Old Man’s Request,” is a sure fire page turned.  Need I say more?
Posted by Ron Fortier at 3:44 PM