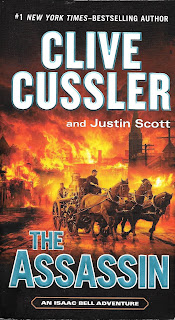 This new Isaac Bell adventure is set in 1905 and begins when a highly skilled sniper sets about murdering high officials working for Standard Oil, the biggest energy empire in America. Bell, as a Van Dorn detective, is assigned to the case and suspects the killings are a prelude to even further crimes all meant to discredit the man referred to as the “Most Hated” in the country, none other than J.D. Rockerfeller.

Once again, writer Justin Scott’s fast moving tale is meticulously researched and his depiction of Rockerfeller an acute one. It offers us a look at a giant of industry who was neither monster or saint, but a complicated mixture of both. To complete his mission, Bell gets himself hired as Rockerfeller’s personal bodyguard and accompanies him to Russia’s Baku oil-fields caught in the middle of an armed revolution. Amidst this violent environment, Bell is sure the assassin will strike again, this time directly at the infamous tycoon.

At the same time the daughters of a company officer, Nellie and Edna Matters become involed with the affair. Nellie is a balloonist and diehart suffraget battling for women’s rights while her sister Edna is a truth-seeking journalist sensing Bell’s investigation will uncover ties to their family history. If so, what are those links and do they lead to the killer?

“The Assassin” is another page-turning thriller in a series that has yet to falter. Each new Isaac Bell book is a cheer delight to even the most jaded action reader. Kudos, Mr. Scott and please, keep’em coming.
Posted by Ron Fortier at 12:37 PM

Back when the difference between a suffragette and a suffragist was important.