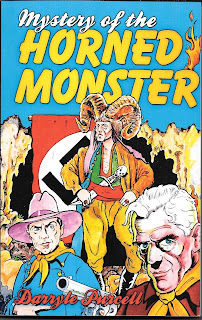 Purcell also did the art illustrations in the book and the cover which is masterfully rendered. How much talent can one man have?  In the end, we are just sorry we hadn’t found this series a whole lot sooner.  If you love serials, historical monster movies and the pulps, we urge you to grab this one now. Trust me, once read, you’ll say you owe us one big time.
Posted by Ron Fortier at 5:00 PM

I've just bought a copy on your recommendation.Hopefully I'll get to start it soon.

Sad to say, I know all the answers to those opening questions in the review, including that Reed Hadley starred as Zorro in a Republic serial(and hosted and narrated Racket Squad) A must book, indeed