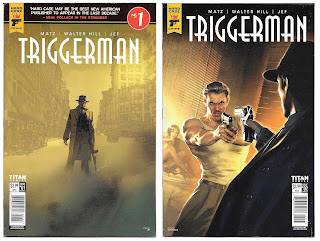 A few weeks ago we wrote our first review of an ongoing Hard Case Crime comic series from Titan Comics.  Now we’re turning our attention on a shorter, 5 issue mini-series by the established filmmaker Walker Hill and adapted for comics by Matz.

To the hermit cave-dwellers among you, Walter Hill is an American film director, screenwriter and producer widely known for his over-the- action films. Some critics credit him with reviving the Western genre. Hill is often quoted as saying everything he’s ever written is a Western. Among his most popular films were The Warriors, Hard Times, The Driver, Southern Comfort, Steets of Fire, 48 Hrs and Last Man Standing.

In “Triggerman,” two low-life mobsters have reneged on a deal with Big Al Capone and disappeared with his money. The wrinkle here is they also fled with Lena  Dorsey, the former girlfriend of convicted mob hitman, Roy “Triggerman” Nash currently incarnated in the Big House. Capone has Nash sprung from prison on the condition he find the two idiots and teach a permanent lesson in what happens to people who cross Big Al. As to the money and the girl, Nash can have them.

And so begins a violent chase which leads Nash to the arid dessert of Arizona and finally to the streets of Los Angeles. Along the way he leaves trail of bodies while igniting bad blood with local bosses and crooked cops. Subtlety isn’t Nash’s style and he’s a man of few words, preferring to shoot first and then pick up whatever pieces are left.

“Triggerman” from the first page of issue # 1 to last of # 5 is one of Hill’s best damn stories ever and this reviewer has to wonder why it has never been filmed. Whereas any half-decent filmmaker would be three steps ahead of the game by using the graphics in this comic as his or her storyboards. We’re new to artist Jef, but it’s obvious he loves this prohibition era genre and his art throughout is simply gorgeous. His lines are tight and precise and the perfect sponge for the muted colors used throughout the series.

“Triggerman” is a fast paced, brutal, crime drama told with an economy of words that is dark poetry.  Somebody please make this a movie.
Posted by Ron Fortier at 11:10 AM