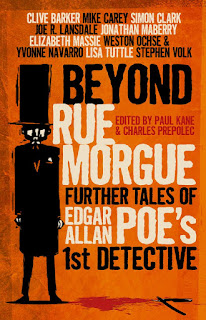 This is such a marvelous idea for an anthology. Editors Kane and Prepolec open the collection with their short essay on arguably literature’s first true fictional detective; Edgar Allan Poe’s C. August Dupin. Then they kick off the book with Poe’s seminal “Murders in the Rue Morgue,” which for anyone with little experience reading dated English prose, is a chore in itself. Whereas once the title classic has been put forth, the curtain opens to nine brand new stories inspired by Poe’s unique character.

“The Sons of Tammany” by Mike Carey.  The building of the Brooklyn Bridge and government corruption is the backdrop to this fast moving yarn.

“The Unfathomed Darkness” by Simon Clark. A fanatical Danish cult sets out on a perilous airship pilgrimage only to end in twisted murder.

“The Weight of a Dead Man,” by Weston Ochse & Yvonne Navarro. Dupin’s grandson, Pinkerton agent Nate Dupes, arrives in Arizona looking for a stolen painting only to get caught up with an ancient cult and a colorful Mexican bandito. An action packed pulper that is much fun.

“The Vanishing Assassin,” by Jonathan Mayberry.  Dupin solves the mystery of a butchered art dealer.

“The Gruesome Affair of the Electric Blue Lightning,” by Joe R. Lansdale. This one throws in everything from Frankenstein to Lovecraft’s Elder Gods.

“From Darkness, Emerged, Returned,” by Elizabeth Massie. A nice little psychological thriller that was my least favorite. Not because it is badly written but because it’s tenuous connection to the theme.

“After The End,” by Lisa Tuttle. This tale is so cleverly plotted; the writer’s prophecy at the end is eerily effective.

“The Purloined Face,” by Stephen Volk. A truly fanciful tale wherein Dupin is actually Edgar Allen Poe; having faked his own death back in America and retired to Paris to pursue his new career as a detective. His assistant and narrator of the tale is none other than a young Sherlock Holmes and together they seek to unravel the true identity of the Phantom of the Opera. A truly imaginative, wonderful story.  Easily my favorite of this collection.

“New Murders in the Rue Morgue,” by Clive Barker. When an American descendant of the Dupin returns to Paris, he finds line between fiction and reality blurred in a truly horrifying tale.

In all this is an eclectic, fun anthology worthy of your attention and support.