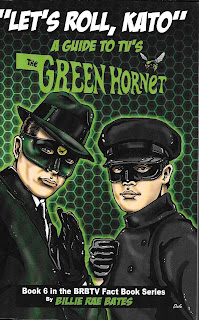 Last year I was contacted by writer Billie Rae Bates. She was in the process of writing what would be the most comprehensive book ever done on the 60’s Green Hornet TV series starring Van Williams as Britt Reid and Bruce Lee as Kato. Whereas I’d subsequently written those characters in my early 90s Green Hornet comic series from Now Comics, Billie reached out to me. We spent a couple of hours one afternoon as she picked my memories about how that comic series came about, what my own feelings were concerning that TV show etc. etc. etc.

Now that book is finished and in print and it is simply a fantastic work of research. Billie starts at the beginning, giving readers an encapsulated history of GH from his origins at WXYZ, the Detroit radio station owned by George Trendle; how Trendle and his top writer, Fran Striker invented the Green Hornet to follow their unheralded success with their western drama, the Lone Ranger. Then she moves over the two Universal movie serials and finally comes to the crux of this massive tome, the television show put together by producer Bill Dozier that so captured the imagination of fans around the world.

The book gives us a break down to all 26 episodes, anecdotes about the cast, the building of the fantastic automobile known as the Black Beauty and hundreds of other details meticulously set forth in this truly fabulous book.  Several years ago, writer cultural historian Martin Gram wowed GH fans with his brilliant giant volume on the entire history of the character’s radio exploits.  With “LET’S ROLL, KATO,” Billie Rae Bates has given us a magnificent companion title to stand right alongside that masterpiece.

No real Green Hornet & Kato fan should be without this treasure.

After seeing the gawd awful trailers, I wisely avoided anything to do with that turkey. Over time, it was the right decision, i.e. many of my friends saw it and now wished they had not.