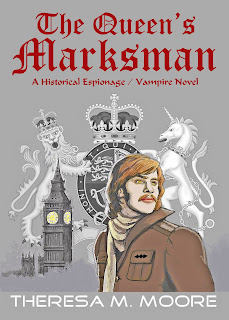 In 1878, young Robert St. John, a descendant of the fabled Earl of Loxley, aka Robin Hood, joins the army to fight in Afghanistan.  On the journey east via the Orient Express with the new recruits, he encounters two very strange European noblemen.  They prove to be vampires and one of them, unable to control his blood-lust, attacks Robert in the middle of the night.  In doing so he turns the young Englishman into one of the undead.  From that point forward, this imaginative adventure focuses on Robert’s learning to adjust to his new life as a vampire.  He quickly learns to adapt his unearthly powers on the battlefield and soon becomes a war hero succeeding in exploits beyond the abilities of normal men.

Upon his return to England, he is knighted by Queen Victoria and, via Prime Minister Disraeli, put in charge of created a new secret service for the empire.  It is clear from the very first page that Ms. Moore had a genuine affection for all things British and she skillfully weaves both its actual history and those myths and legends that have endeared themselves to fiction fans for generations.  Via the exploits of Sir Robert, we glimpse a Victorian world on the cusp of the Industrial Revolution and a burgeoning 20th Century that will be filled with both wonders and horrors.

None of the latter is more gruesome than the appearance of Jack the Ripper on the streets of White Chapel.  As the empire’s colonial strength begins to wane around the globe, its own moral decay accelerates in the swelling ranks of the poor and homeless.  And amidst this changing world walks the Ripper, a madman with his own brand of soulless insanity.   Ms. Moore offers up Sir Robert, and his fellow vampires, as agents of good working in the shadows to keep civilization on track.  Soon our hero and his vampire companion are on the hunt to find Saucy Jack and end his murderous rampage.

Though not what we would label a fast paced action pulp, “The Queen’s Marksman,” is a steadily told adventure focused on developing rich, full realized characters both good and bad.  We enjoyed it a great deal and it once again adds substantial evidence to our beliefs that the best new fiction on the market today is coming from small, independent publishers like Antellus.  Bravo, Ms Moore and well done.
Posted by Ron Fortier at 10:21 AM