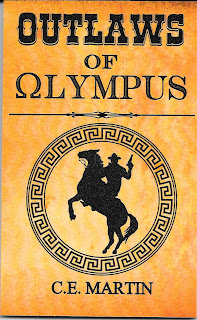 OUTLAWS OF OLYMPUS
By C.E. Martin
Available at Amazon
55 pages

Just when you think a genre of pulp fiction has been fairly well exhausted, up pops a new wrinkle. In this case the genre is the Weird Western and the guy offering us a new twists on this popular field is C.E. Martin with his “Outlaws of Olympus” concept.  The title pretty much gives the idea away, but for those of you who somehow missed Classical Mythology in high school, here’s what C.E. sets forth.  The ancient Greek Gods, you know, Zeus, Mercury and the others have reappeared on Earth during the Westward migration of the late 1860s.  Ergo, you have gods, demi-gods and mythological monsters sharing the wild frontier with your cowboys, settlers and Indians.

It’s a heady stew and with this first little chapbook, things get kicked off fast. Mercury, in the guise of an outlaw known as the Quicksilver Kid, is causing mayhem and destruction as he mows down anyone foolish enough to confront him with a special six-shooter that fires gold bullets.  Then Hercules arrives in the guise of a Catholic Monk named Father Sergio Morricone.  (Yes, we know where that came from. C.E. has a fine sense of humor.)

The Kid is holding an entire town captive and forcing them to offer him a blood sacrifice every few days or else he’ll wreak bloody havoc.  When Father Morricone shows up, their confrontation is as one would expect between two gods.  But who is the black cavalry soldier riding with Hercules and what role will he play in their final battle?

Fifty-five pages flies by when the action is this colorful and frenetic.  We’ve been a fan of Martin’s “Stone Soldiers” series for a few years now and are thrilled to see him launching another great new pulp saga with tons of potential.  Stay tuned.