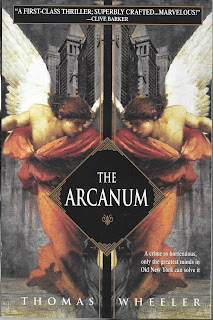 THE ARCANUM
By Thomas Wheeler
A Bantam Trade Paperback
325 pages

Here’s a question for you; can a book ever be too much fun to write?  Or how about the other side of that coin; can a book ever be too much fun to read? Well, not when it’s Thomas Wheeler’s “The Arcanum.” Of course our only regret here is that we waited so long to pick up a copy.  We love team-up tales wherein certain characters, either fictional or historical, meet and share an adventure together.  From the comic adventures of the Justice League of America and the Avengers to Alan Moore’s amazing “League of Extraordinary Gentlemen,” such team-ups have always fired our imagination with the idea of multiple heroes coming together to fight the forces of evil.

Published in 2004, this story informs us that long ago a mystic named Konstantin formed team that included author Arthur Conan Doyle,  magician Harry Houdini, New Orleans Voodoo Princess Marie Laveau and weird-fiction writer H.P. Lovecraft to help him fight all manner of occult evil.  He called them the Arcanum, deriving from the word arcane pertaining to the secret and mysterious.  The book opens twenty years later with Konstantin’s murder and the theft of a rare, lost religious tome called the Book of Enoch.  Supposedly it tells of fallen angels who still inhabit our world.  Whoever possesses the book will gain the power to find and control these supernatural creatures.

Realizing that threat, Doyle, now sixty-years old, both famous and tired, travels to America to reassemble the Arcanum for one last adventure. At the same time a maniacal serial killer begins murdering the poor and destitute homeless in the slums of New York by tearing out their spines.  All too soon, Doyle learns these killings are directly related to the Book of Enoch and the mastermind behind the killings is somehow using them as part of larger scheme.

Honestly, the second Doyle and Houdini are reunited, the sparks begin to fly.  Wheeler’s ability to capture the essence of these two wildly different personalities works to perfection in propelling the plot.  All of us are aware of the true friendship between these two turn of the century super stars and how it was ruined by Doyle’s emotional conversion to spiritualism after the death of his son in World War One. All these elements weave their way into this story.  Then there is the shy and enigmatic Howard Philip Lovecraft, one of the greatest horror writers of all time and the exotically beautiful and powerful Marie Laveau.

When one has such colorful characters, it is near impossible not to lose one’s self in the melodrama. It is clear from the onset that Wheeler had a genuine affection for the members of the Arcanum and writing their final adventure is truly a work of love on his part. That passion is infused in every single chapter. So much so that the reader can’t help but share it. Thus upon reaching the end, we were simulatneously happy and sad.  Happy for the ride Wheeler had given us with his marvelous imagination and sad that like all great carnival rides, it too had to come to an end. Please, if you love true, fast paced, action filled pulp adventure, you will not find any better than “The Arcanum.” Now go buy a copy.  You can thank me later.
Posted by Ron Fortier at 10:43 AM