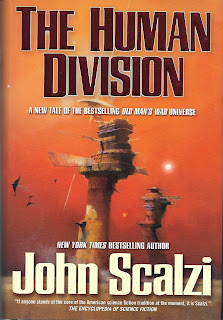 Rare are the times when a reviewer so loves a book that he or she has to share it with close friends and family, never mind their reading audience.  Such was the case years ago when we first read John Scalzi sci-fi actioner “Old Man’s War.” We hadn’t been that excited about a science fiction novel since the days of Asimov and Heinlein.  Thankfully that book was only the first in a series and subsequent titles set in that universe soon followed. All of them were exceptional and much fun. Scalzi is a skilled writer with a gift for creating endearing characters.

Now we have “The Human Division,” the latest in this series centered about the super military organization of earthlings known as the Colonial Defense Union. In the distant future, mankind has ventured into the stars only to discover they are populated with thousands of alien races, some friendly, others not so. To survive these encounters, humans create super soldiers, i.e. new scientifically enhanced bodies capable of withstanding harsh environments and going toe to toe with hostile aliens. These bodies are then offered to the Earth’s senior population; men and women in the twilight days of their lives. All they have to do is pledge ten years of service to the CDU and they’re consciousness is implanted into one of these green super bodies. Thus someone nearing death is given a second chance at life.

That’s the basic set-up. In this latest entry, a schism between the Earth and the CDU has materialized when it became clear to the governments of Earth that the CDU was basically using the planet’s over population as a breeding pool for their armies; an ugly truth that, when shown in such a harsh light, didn’t sit well with various Earth governments.  Earth has broken off relationships with the CDU prohibiting any further seniors from leaving. Then to add more headaches to the beleaguered CDU, a confederation of alien races calling itself the Conclave, begins overtures to recruit the Earth into their organization thus effectively separate it politically from the CDU.

As the book opens, members of the CDU’s diplomatic corps are tasked with smoothing over the Earth’s ruffled feathers and re-establishing a viable alliance between the CDU and its mother world. Without warning terrorist attacks are launched against both CDU envoys and Conclave diplomats. A mysterious third party has entered the game and is doing its best to start a war between the two space faring groups.  Caught in this topsy-turvy chaotic mess is the crew of the CDU Ambassador ship Clarke led by Ambassador Abumwe and captained by Sophia Coloma. Among the ambassador’s retinue are diplomatic assistant Hart Schmidt and CDU Tech Lt. Harry Wilson.  They are the book’s central cast and Scalzi tells his story via a series of interconnected short stories brilliantly wet forth; each building to the climatic finale.

“The Human Division,” recaptures the wonder and excitement of “Old Man’s War,” but on a grander scale and certainly left this reviewer wanting the next installment soon. This is old fashion sci-fi done right and we certainly need a whole lot more of that these days.
Posted by Ron Fortier at 9:51 AM