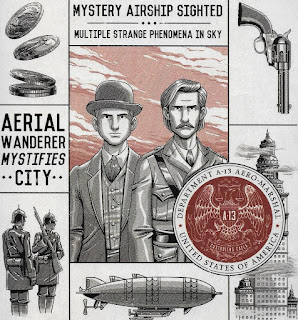 It’s 1897 and the 19th Century is coming to an end.  America, still rebuilding from the ruinous Civil War, is on the cusp of the Industrial Revolution.  Things look bright for the future until mysterious reports of strange flying aircraft begin to filter into Washington. Staring from sightings on the west coast, these viewings begin springing up in an eastward route until they become weekly occurrences in the skies over America’s heartland.

Unable to ignore the public’s fears as fueled by exploitation newspapers, two young men are sent to investigate different aspects of this phenomenon; Army Lt. Valiantiene and Treasury Agent Cabot.  All they manage to uncover is yet more mysteries such as the appearance of strange, counterfeit gold coins in the vicinity of the airship sightings and the brutal slaying of innocent country people at the hands of monsters that tear their victims apart as if they were rag dolls.  Can these beasts also be connected to the weird skyships?

About this time, both men are introduced to each other and told they are to work together as the first operatives in a new branch of the Secret Service to be known as A-23 Aero Marshals.  Up until this juncture, the book had been a straight mystery novel but once Cabot and Valiantine join forces, their burgeoning relationship adds the much needed fun part of the entire adventure and easily sets up the following series of events the two must content with and overcome.

If we have one critique with “Airship Hunters,” it is that the publisher should have announced somewhere on the covers that this was only the opening chapter of a series and that the main mysteries that set everything in motion are actually not solved by the book’s end.  Which is a minor cheat, but still a cheat.  You see, we liked this introduction to Cabot and Valiantine and are eagerly going to be awaiting the next chapter of this saga regardless.  We’d strongly urge you to join us.
Posted by Ron Fortier at 12:57 PM