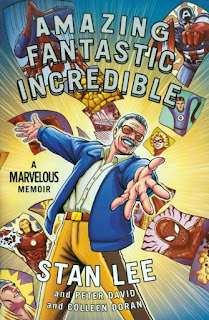 I was a 13 year old comic book reader when the birth of Marvel Comics launched the Silver Age of Comics in the early 1960s.  That’s why writer/editor Stan Lee, after family and teachers, has had more of affect on my life than anyone else in this world. Through his innovative changes to the media writing imperfect heroes with problems, he elevated the storytelling in comics and for the first time made them appealing to adults.  It is no small wonder that I grew up wanting to be a comic creator.

So yes, Stan Lee is one of my personal heroes and reviewing a graphic novel autobiography required a bit of distancing on my part.  What you have here is a one man’s story of what happened from his early days as a youngster in New York City to his becoming one of the most recognizable cultural celebrities in the world.  As with all such autobiographies, all we can rely on is his version and in that regards some of the stories concerning his conflicts with other well known comic personalities is to some degree suspect. In all such incidents we understand there was another side and yet Lee doesn’t shy away from those awkward events that were painful to him and his family. To his credit, he goes out of his way to credit people like Jack Kirby, Steve Ditko and all the other amazing creators who built Marvel Comics. I was personally touched with his tribute to his own younger brother, Larry Leiber.  And whether you choose to believe his narrative completely or not, there is no escaping the fact that Stan Lee knows HOW to tell a story.

Which is the part of this volume we can address with unabashed praise.  The art by Colleen Doran is magnificent throughout and finds her adjusting her style from realistic depictions of actual people to outlandish cartoony figures when depicting one of Lee’s many wacky anecdotes.  Kudos also go to Peter David, one of the finest comic scribes in the business. I have to believe he is partly responsible for taking Lee’s wandering reverie and shaping it into a linear tale with a beginning, middle and end.

This book is a gem and for this veteran Marvelite, a treasure.  It was given to me by my family for Christmas.  They obviously know that within this aged body there still resides an eager, excitable 13 year old who so enjoyed this trip back to a much happier time.  As Lee would say, Excelsior!!