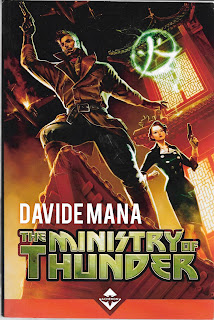 “The Ministry of Thunder,” is a rollicking tongue-in-cheek over-the-top pulp winner that completely won me over within its first few chapters. It’s Indiana Jones meets Bill Barnes with a touch of Kung-Fu thrown in to spice things up.  It is the first Davide Mana book we’ve read and we certainly hope not the last.
Posted by Ron Fortier at 9:47 AM