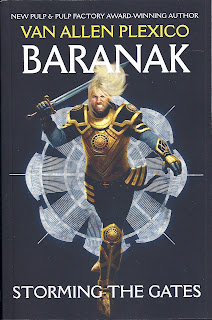 One of Plexico’s hallmarks is the breakneck speed at which he propels his plot never allowing his reader a moment’s respite as his protagonist is plunged into one amazing adventure after another. He creates unique, alien allies and foes that confront Gaius at every turn until in the end; his family’s very survival depends on his keen insights into both their various natures. Dealing with cosmic forces beyond understanding, Constantine’s son must gamble with the fate of his people to either achieve a bold new future or fail and watch them totally destroyed.  “BANARAK – Storming the Gates,” is a space opera thrill ride that never disappoints.  If you have never a Van Allen Plexico space adventure, this is clearly the place to start.
Posted by Ron Fortier at 11:31 AM