THE QUEST OF FRANKENSTEIN 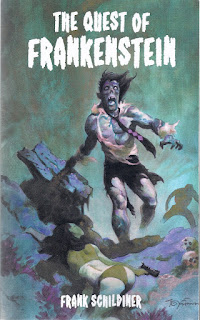 Most of my experiences with Frank Schildiner’s work has been reading and editing his fast paced, action pack hero-pulp short stories.  That his first full length novel should be one of unremitting horror came as a surprise to say the least.  I had no idea what to expect when I opened it and began the first chapter.  I should note this particular book falls in line with a series of older Frankenstein books written Jean-Claude Carriere begun in 1956.  As explained by the editor/publisher Jean-Marc Lofficer in his introduction to this volume. Carriere’s tales interpreted the monster, known as Gouroull, as a more savage creature obsessed with goals in his twisted life; one the creation of a mate and the other the total destruction of all mankind.

It is this version that Schildiner continues in his book.  The setting is the height of World War One and in the midst of the all the battlefields of Europe, Gouroull appears reviling in the unrelenting bloodletting. Ultimately he encounters the mad scientist Herbert West who has become a disciple of his late creator, Victor Frankenstein.  West is thrilled to finally meet Gouroull and agrees to create a mate for him if the monster will procure half a dozen occult artifacts scattered throughout the world.  Being virtually indestructible, Gouroull sets off to complete his assigned task.  Thus the book’s first half becomes a bizarre scavenger hunt through some of the most frightening settings ever culled from horror fiction. Schildiner has much fun taking his protagonist on this journey and each chapter has the monster encountering one memorable fiend after another. Honestly, the congress of famous vampires that occurs in chapter five is worth the price of admission. It had me chuckling aloud and stomping my feet on the floor with the introduction of each new invitee.  From Barnabus Collins to Dracula himself, this is by far the most colorful vampire gathering ever put to paper.

Of course procuring those unique objects proves to be no challenge to Gouroull.  But when he returns to mad doctor’s lab with these items, he is told his mission is only half completed.  Even with the arcane treasures to replicate Frankenstein’s operation, West still requires the bones of a strong and powerful woman upon which to build this new creation. Once again Gouroull is off on yet another journey through the back roads and dark woods of the continent and for a second time the quest formula becomes Schildiner’s tool to showcase some of the more evil females of legend and history.

“The Quest of Frankenstein” is one of the most well written horror pastiches ever imagined and Schildiner’s work rivals even the most experienced scribes in the field. For in the end, it is his sincere love of the genre that shines through every single page and pulls the reader along for one hell of an unforgettable ride. Easily one of the most enjoyable books I’ve read all year and one truly warranting a sequel.  This is my kind of monster!

Not a fan of horror stories I found this telling of a quest (by Frankenstein) for a special mate, going thru a miriad of characters, very amusing.
I looked forward to reading who or what the next outlandish creature would be like & what special powers they had to offer.
Fun read.