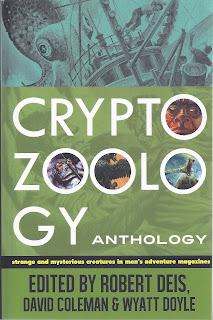 Once again, Men’s Adventure Magazines (MAMS) historian, Robert Deis, and his co-horts, David Coleman and Wyatt Dole, have put together another absolutely wonderful collection of bizarre tales culled from the various MAMS published between the 50s and 70s.  In their first book, “Weasels Ripped My Flesh,” they assembled an eclectic mixture of every possible genre known to men’s fiction from westerns to crime and mystery and heroic war tales.  They followed this up with a volume devoted entirely to the works of writer Walter Kaylin, one of the most prolific pulp writers of the era, in a gorgeous package entitled, “He-Men, Bag Men & Nymphos.”

With this latest entry, we are given a healthy dose of weird creatures that roam the remaining wilderness areas of the world.  Here, in what these long-ago pseudo scientific experts labeled Cryptozoology, are stories that relate amazing encounters with all manner of freakish monsters from the Abominable Snowman (the largest group in the book) to horrific sea monsters capable of sinking the largest ocean liners and high mountain Thunder Birds so large they can carry away adult humans in their razor sharp talons.

If you’ve ever wondered at where the legends of such notorious beings as Bigfoot and the Jersey Devil were born, you needn’t look any further than these pages.  The MAMS were crammed with these eye-witness sightings, often at the cost of human lives.  Here are reported accounts by hunters, explorers, scientists and unlucky travelers, all testifying to those mysterious things that go bump in the night lost in the deep woods of our imagination.  And that is what is at work throughout each and every one of these macabre episodes, sheer, unbridled imagination.  Hell, there’s even a story about a sea leviathan by none other than Arthur C. Clarke.

“Cryptozoology Anthology,” is the kind of book P.T. Barnum might have been hawking in front of his circus tents to make a few extra pennies before allowing us into the inner big-top to view the wonders chained inside.  It is a book for those of us who remember a world a little less mapped and a whole lot more dangerous.  Grab a copy, get your ticket punched and hang on for the ride.  It’s a whopper!