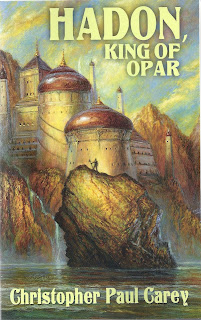 Opar, the lost jungle city first appeared in the pages of Edgar Rice Burrough’s “The Return of Tarzan.” Some believe Burroughs took the name from the Biblical reference to Ophir, whence King Solomon supposedly received a cargo of  gold, silver, sandalwood, precious stones, ivory, and other treasures every three years via some unknown, secret route. Burroughs would revisit the lost city in several other Tarzan adventures to include “Tarzan and the Jewels of Opar,” “Tarzan and the Golden Lion,” and “Tarzan the Invicncible.”

In 1974, the late Philip Jose Farmer took it upon himself to write the history of Opar and beganwith his novel, “Hadon of Ancient Opar,” and continued it with “Flight to Opar,” published two years later.  Now Christopher Paul Carey has picked up the narrative and will most likely carry it to its ultimate conclusion.  In the words of Phantom creator, Lee Falk, for those who came in late, never fear, the publisher has provided an abbreviated history of events which is found as a helpful supplement in the back of the book.

Whereas not having read any of these previous chapters, we found this a rollicking good adventure read and any reader with even the slightest familiarity with either Burroughs or Farmer will have no problems enjoying this tale.  At the offset, Opar is invaded by a large force of river pirates led by a sadistic mercenary named Gahesi.  In the middle of the night, Hadon, the King, rallies his troops and goes out to battle his foes. Too late he learns the enemy’s forces have found the secret tunnel passages into the vast city and have already gained control of its primary routes of access.

Afraid to commit his remaining forces, Hadon opts to reenter Opar via this same maze of secret passageways and learned the fate of his queen and family.  In the process he discovers it was one of the high priest and priestess that betrayed them in divulging the secret routes to Gahesi in hopes of sharing in the coup’s bloody victory. But Hadon is not so easily defeated and through a series of near fatal encounters, he manages to rescue a few members of his beloved family and rejoin his troops outside the gates to the city. Here he is discovers even more startling news; a group of giant warriors led the son of Hadon’s deceased cousin, Kwasin, have arrived on a quest to learn the fate of their sire.

Could they possibly be the allies Hadon needs to retake Opar and defeat the river pirates? The opportunity exists but first Hadon will have to fight eight foot tall leader of the giants to prove his worthiness.  Spinning a non-stop adventure tale, Carey’s pace never lets up and his easy, competent style allows readers to slip into this ancient, magnificent world he has so expertly brought back to life.  Burroughs and Farmer would have been proud.