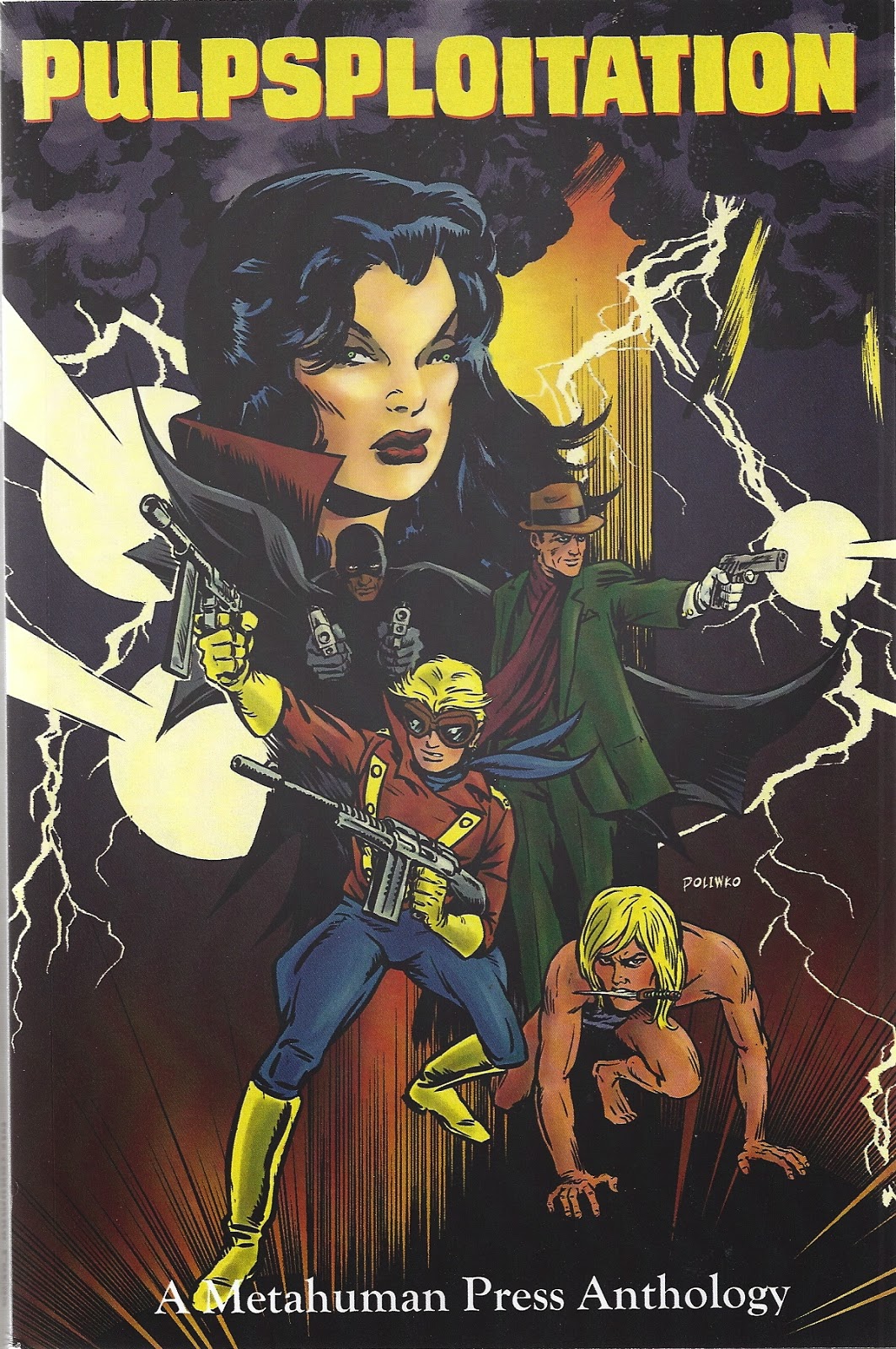 Exploit – A notable deed or act. To use to best advantage.  To make use of selfishly or unethically.

The word exploit didn’t attract any particular attention until the folks in Hollywood got  hold of it and then we were given the Exploitation film which was usually applied to any film which was considered to be low budget and attempting to gain financial and critical success by “exploting” a current trend or a niche genre of a base desire for lurid subject matter.  This meant these movies needed something to exploit and for most it was either sex or violence.  And we’ve all heard the term, Sexploitation.

So it is only logical to assume an anthology calling itself “Pulpsploitation” is going to be saturated with excessive, gratuitous sex and violence in large quantity.  To varying the degrees, the five writers in this collection have no qualms of dishing out both whenever necessary to keep their stories moving.  Still, the idea of seeing a classic hero like Airboy having sex is a bit unorthodox to this pulp fan; to say the least.  So this review comes with a very emphatic Adults Only recommendation.

Now the five tales that make up this book spotlight not only classic pulp heroes but a few popular comic book stars also make an appearance.  Every story is a reimagining of the character in a new, more modern setting and that is the real fun here.

Ahlelm starts the collection with that vary Airboy adventure, “Time Enough For Love,” which has Davy Nelson reawakens after having been a prisoner aboard the Air Tomb for over thirty years.  The world of the 1980s is strange and alien to him to say the least Still he has the aid of the Flying Dutchman’s beautiful daughter to help get familiar with this brave new world.  She explains to him that remnants of an old Japanese foe are about to launch their own atomic bombs on the US and its up to Airboy to save the day.  But first he must find his super-plane Birdie and satisfying the lustful longings of his beautiful ally; which is where the tale gets R rated.  Alhelm’s a solid writer and he knows these golden age characters extremely well and we doubt seriously after reading through the obligatory “sex scene,” many of you will ever consider Davy Nelson a “boy” again.

Next up writer Teel James Glenn showcases as yet another comic hero; the Gunmaster.  Although personally not familiar with this character, we were educated easily enough in his story, “Praey For The Raven.”  Following the theme of the anthology, the story opens in the past with Gunmaster Dumas Poe chasing after his nemesis, the Raven.  He fails to capture him and many years later, it falls to his son, Darian Poe, to complete the mission.  In reading through this story, we were struck with how much Gunmaster has in common with another classic pulp/comic hero; the Green Lama.  Both are given backgrounds involving Far Easter mysticism, they both employ the same phrases and there exist a connection in their names.  All in the all, the original Gunmaster was very much a Gun Toting Green Lama.  Glenn is to be applauded for moving the series forward by the creation of the original’s son and promises to do much more with the concept in future volumes.

By far our favorite entry in this collection was Frank Byrns creation of a brand new Black Bat to follow in the footsteps of the iconic pulp hero.  In the 80s, retired lawyer Tony Quinn has begun a legal foundation to help the impoverished minorities living in the poorer sections of New York.  One of his lawyers is Jackie Clay, a black man whose own brother is involved with dealing drugs.  When a gang war with a rival faction threatens to destroy innocent lives in his home community, Clay adopts the mantle of the Black Bat to bring justice to these modern evil-doers, all under the watchful eye of old Mr. Quinn.  And set to aid Clay in his future battles are two rather important members of the Quinn Foundation; Carol O’Leary, the redheaded daughter of Butch O’Leary and Detective Danny Kirby, the son of former conman, Silk Kirby.  Byrns’ new Black Bat and company is wonderfully realized and we can’t wait to read their further adventures.  We also appreciate that he eschewed any kind of sexual encounters; leaving us to enjoy a more traditional pulp yarn.

The fourth tale is another winner; this one by Australian writer Steven Gepp.  He offers up a jungle hero named Tabu.  Having never heard of this character, we’ve no idea if he appeared in the pulps or comics.  It would have been nice if Gepp could have provided us with a little background history along with his bio.  Regardless, Tabu is very much a cookie-cutter figure who has been transplanted out of Africa and into a metropolitan US city where’s he’s become a big-time wrestling personality.  That alone was enough to have us enjoying this action story.  The Col War Russians are after a Star Wars type weapon invented by America and it’s up to Tabu to make sure it doesn’t fall into their hands.  All in all a very fun romp.

Lastly we have E.A.G.L.E. – Alpha & Omega by Caine Dorr that reads a great deal like many of the old classic pulp spy thrillers ala Secret Agent X and the Secret Six.  Commander Shannon is a veteran operative for a super secret outfit called E.A.G.L.E., which is his personal codename as well, that eliminates threats to America that cannot be dealt with by conventional law enforcement agencies; to include assassinations.  We have no idea if this tale is based on an actual pulp or is the author’s own original creation.  Either way, Commander Shannon comes across like an older version of Mack Bolan and the writing here is crisp, fast paced and delivers the standard action one would expect from such a genre.

All in all, book one of “Pulpsploitation” is extremely well realized with five top-notch stories any “adult” pulp readers will find entertaining.  And we would be remiss if we didn’t give kudos to a gorgeous cover provided by the super talented Nik Powliko.  This is a great package cover to cover and we’re only to happy to give it major thumbs up.  Hopefully a volume two is in the works.

Ron, I've read a couple of Gunmaster comics, and they're actually pretty good masked western tales. Sort of like Marvel's 60s western heroes, only from ACG.

Tabu is a pre-existing character, but I don't know much about him.