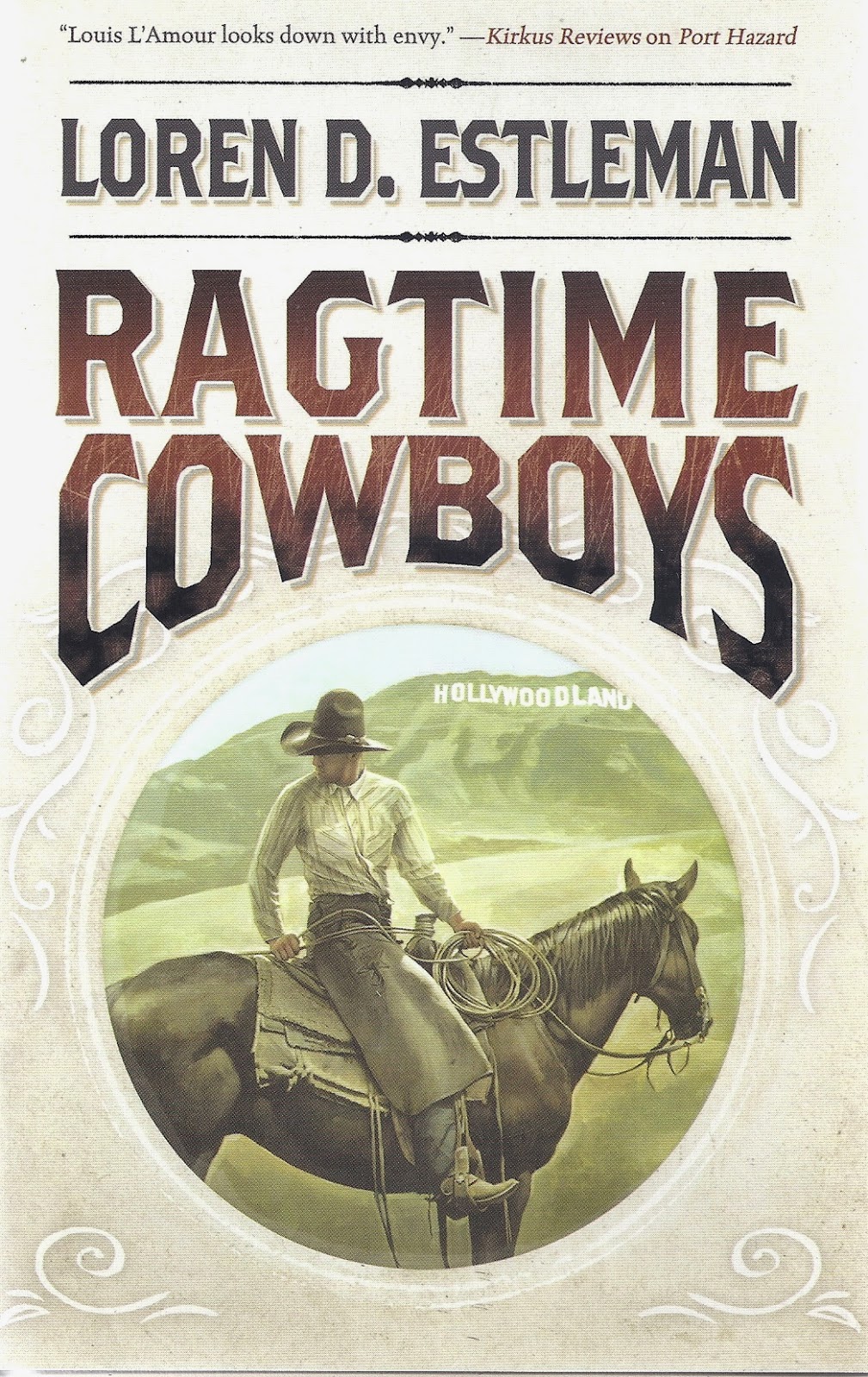 I have a particular fondness for stories that pair historical figures together in fictional adventures.  These people actually lived during the same time but in reality never met, ergo the wish-fulfillment element in this kind of what-if story.  That’s what Loren D. Estleman has done with “Ragtime Cowboys” and it works to perfection.

As unlikely as it seems, both Charlie Siringo and Dashiell Hammett did have several things in common; both worked for the famous Pinkerton Detective Agency at one time and both later went on to become published writers.  Siringo was recognized more for his illustrious lawman career which had him rubbing elbows with the likes of Billy the Kid, Pat Garrett and Butch Cassidy and his whole in the wall gang.  There have been scores of books and films about his life and career securely guaranteeing his place in western cowboy history.  Hammett on the other hand would gain renown for his literary achievements giving the mystery world such classic personages such as Sam Spade and Nick and Nora Charles.  Thus they were karmic opposites, one famous for his real exploits, the other for his fictional creativity.

And so Estlemen brings them together in 1921 California.  The tale begins in Los Angeles where a senior Siringo is attempting to write another book about his colorful past. He is visited by an aged Wyatt Earp.  Earp owns a horse ranch and one of his prized racing horses has been stolen.  He hires his Siringo to find and retrieve it.  The only clue they have is the suspected thief has just been hired to work for the widow of Jack London on her spread in the hills beyond San Francisco.  Earp sends Siringo to Frisco where he is met by a young man also a former Pinkerton veteran who will act as his guide and aide; one Dashiell Hammett.

The dialogue between Siringo and Hammett is brilliant and hilarious.  While Siringo was a staunch Republican who despised socialist of every ilk, Hammett was an avowed liberal who never missed a chance to criticize the noveau American rich gentry.  From the second they meet, the sparks fly and it is only through their trials together that they ultimately come to respect each other’s grit and strength of character. How that mutual respect evolves is the true beauty of this cowboy fable.

Oh, there’s also an underpinning plot of political corruptions wherein our two ragtime cowboys get mixed up with the Teapot Dome Scandal.  This was a bribery incident that took place between 1920 and 1923 during the administration of President Warding Harding which ultimately led to the Secretary of the Interior, Albert Fall becoming the first Cabinet member to go prison.  The entire plot is a nothing but a flimsy gimmick with which to bring Siringo and Hammett together against an authentic historical event.  Its revelations at the book’s climax are superfluous and easily forgotten.  What is not is the shoot-out at the London ranch and both Siringo and Hammett reliving their raucous rowdy youthful escapades one last time.

“Ragtime Cowboys,” is an insightful look into America’s past through the eyes of two remarkable men, both of product of their times.  It is one of the most enjoyable books I’ve ever read.

First time I ever heard of Charlie Siringo was in the movie "The Missouri Breaks" where Harry Dean Stanton discusses him and his prowess as a lawman to the other members of the horse rustling gang he and Jack Nicholson boss. Intrigued me enough to do some research on him. Fascinating guy.