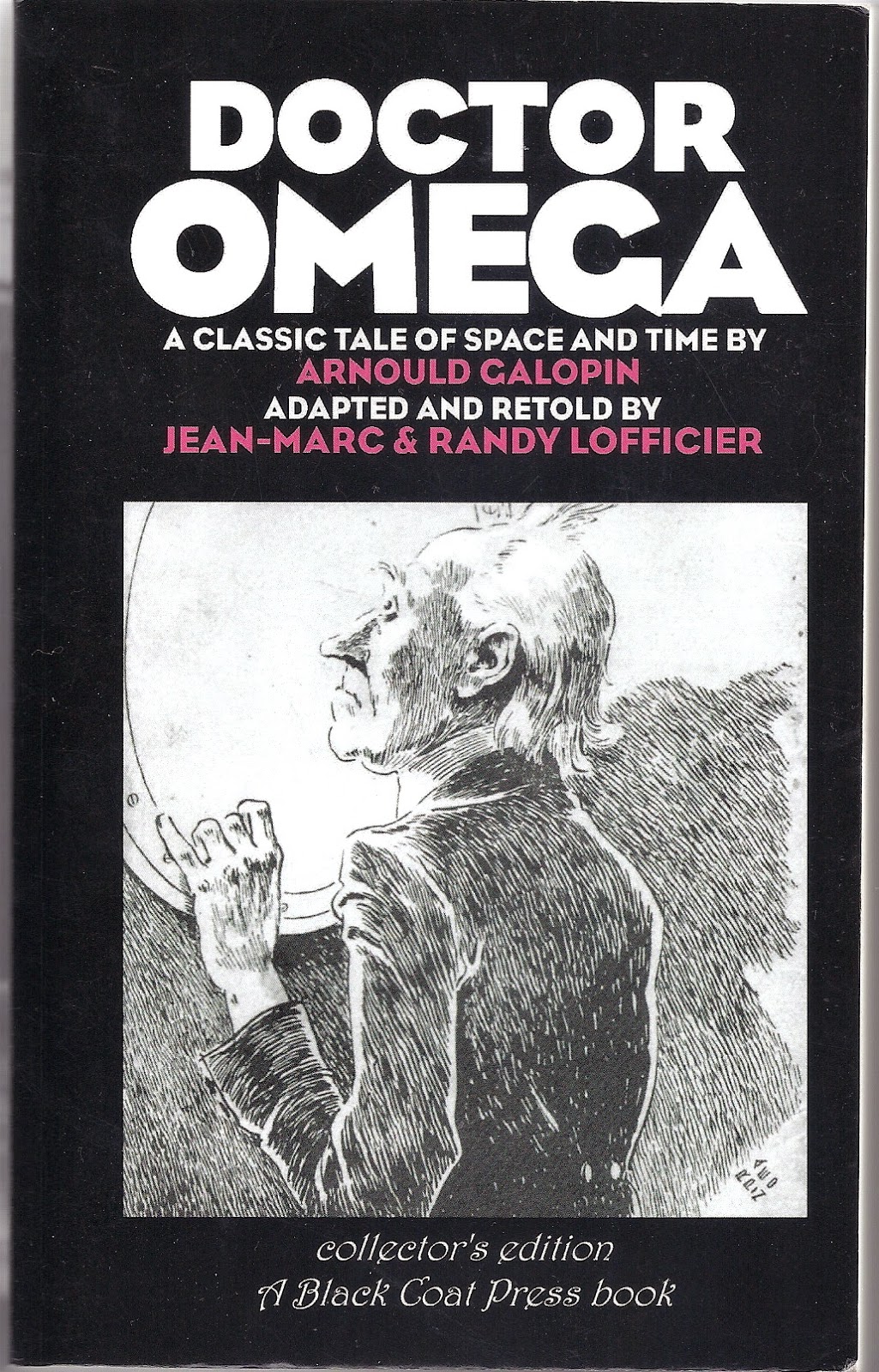 Was there a French fictional character “who” appeared in a 1905 book that just possibly might have been one of the inspirations for the famous British sci-fi icon, Doctor Who?
Upon reading this 2003 edition from Black Coat Press, one would be hard pressed to believe the similarities between writer Arnould Galopin’s Doctor Omega and that other fellow are purely coincidental. Then again, in the world of pulp fiction, stranger things have happened.  Still whether you choose to believe the above supposition or not, it did not hamper the enjoyment this reviewer had with this wondrous and little known sci-fi French adventure.

The story is told by one Denis Borel, a semi-retired violin teacher who settles in the peaceful Normandy countryside to get away from the hustle and bustle of Paris. But he soon discovers he has a rather eccentric neighbor in a white-haired gentlemen named Doctor Omega.  This scientist has invented an amazing ship, the Cosmos, that can travel through both time and space and he invites Borel to accompany him on his voyage to Mars a billion years in the past.  Accompanying them is Dr. Omega’s aide-camp, a burly bearded fellow named Fred.

And before you can shout Sacre Bleu!, the trio take off for the bizarre red planet as it existed in ages past.  The Cosmos is not only a spacecraft, but it can be altered to become a submersible thus allowing them to explore the depths of Mar’s seas and then it extends tractor wheels and becomes a pseudo tank carrying them across the harsh landscape of this alien world.  Eventually Dr. Omega and his companions discover all manner of animals, flora and ultimately a dwarfish race of Martians.  Considering when this book was written, we can’t help but marvel at Galopin’s boundless imagination as his tale is wonderfully interpreted and enhanced by the Lofficiers.

“Doctor Omega” is a real treasure from the annals of early science-fiction and though nowhere as successful or famous as Wells or Verne, Arnould Galopin deserves some recognition for this truly exceptional work.  As to the similarities between Dr. Omega and that other doctor, we’ll let you decide for yourselves.  This reviewer is simply happy to have had the chance to meet both of them.

Now that sounds like fun. Thanks for the tip!

I am glad that you enjoyed the book!

It's one of my favorites concerning a proto-Doctor.

The other being H.G. Wells's brief novella, THE CHRONIC ARGONAUTS, published in The Science Schools Journal of The Royal College of Science, in 1888.

Here is a link to that story:

And seeing how you like DOCTOR OMEGA, I can't wait to see what you think about Black Coat Press's follow-up anthology series, DOCTOR OMEGA AND THE SHADOWMEN.

Have a great weekend, Ron!

And thank you for the shout-out!

Glad you liked the review, Lucas. I too am anxious for the all new Doctor Omega anthology from Black Coat. Expect to find a review here after I've read it.