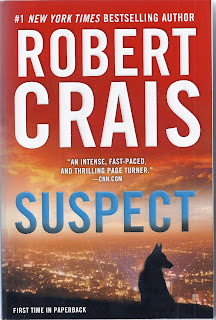 So, let me conclude with this one thought.  Hollywood, you’ve been given a gem of a tale to bring to the silver screen. As in all such adaptations, casting will be all important and somewhere out there, you had best find the next Rin-Tin-Tin.  Maggie deserves nothing but the best you have to give.
Posted by Ron Fortier at 10:20 AM

Great review Ron! I loved this book. Crais is one of the few mainstream writers I'll buy in hardcover at full price, which I did with this one.

Hi Ron -- I am a big fan of Robert Crais, but the publicist was not quite accurate. Crais has steadfastly refused to sell his Elvis Cole/Joe Pike works to Hollywood, but HOSTAGE (2005) starring Bruce Willis was based on a thriller by Crais.

Hi Greg, thanks so much for the correction here, it is much appreciated. I remember HOSTAGE and liked that movie a great deal. Here's hoping, again, that Hollywood does justice to SUSPECT.

When I read this, I couldn't help but think I liked the similar Doan and Carstairs series better.