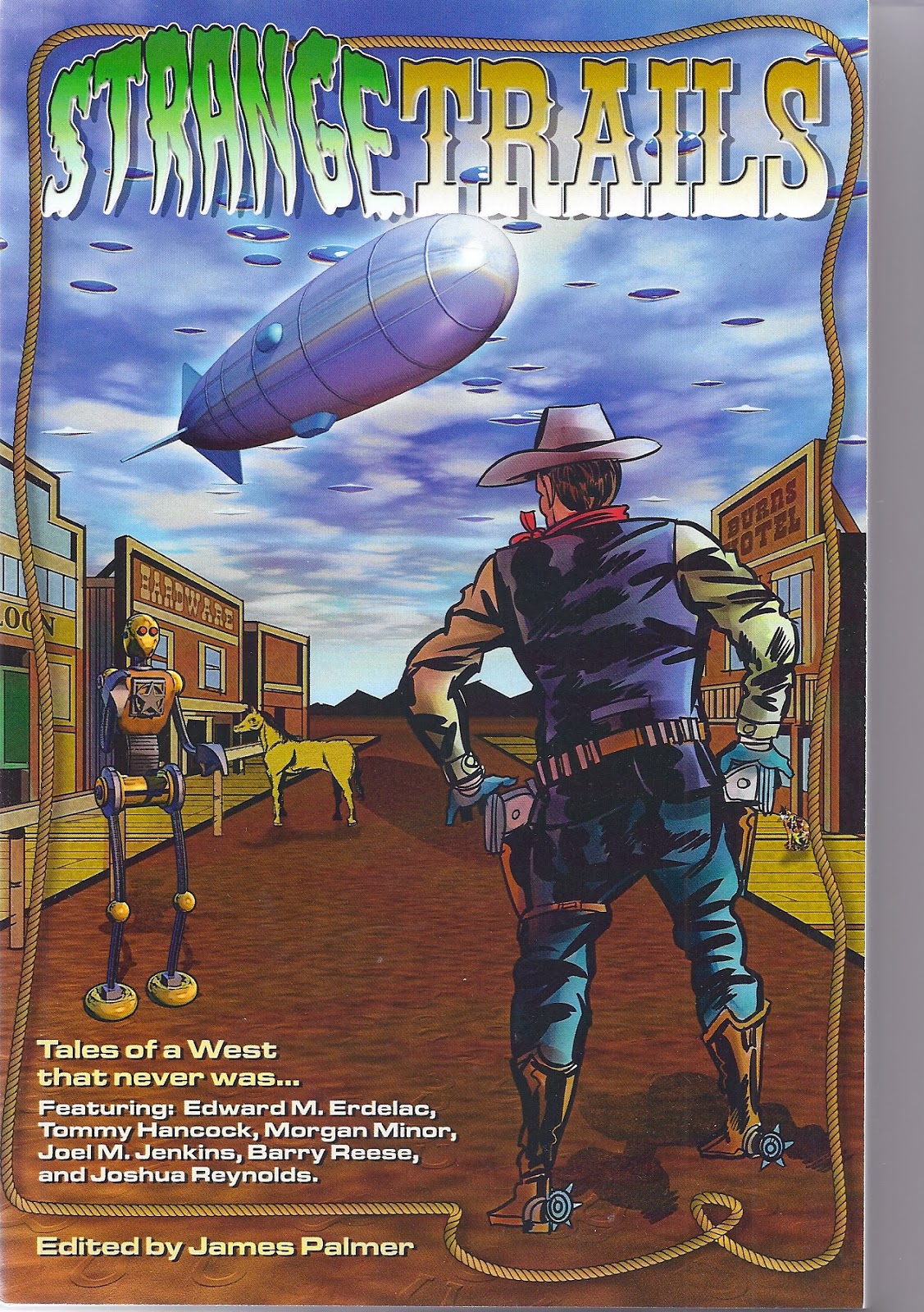 Weird westerns have become highly popular among new pulp readers of the past five years with lots of major publishers getting in on the act.  Now comes this collection of six such tales by some of the best scribes in new pulp fiction as edited by James Palmer.

Josh Reynolds leads the pack with his Pinkerton agent in, “Mr. Brass and the Mass of Serpents.”  Imagine a steampunk western mash up with Lovecraftian horrors and you have this fast moving entry wherein Mr. Brass, accompanied by a young occultist named Warren and the legendary black lawman, Bass Reeves, must get their prisoner aboard the 3:10 airship to the federal prison while fighting off a hosts of snake-people.  Though the story is fun, its glimpsed into an alternate world is much too brief and left this reader feeling cheated.  There’s obviously a whole lot more to Reynold’s creation than what we were given here.

“Sins and Lilies,” is offered up by Tommy Hancock and newcomer Morgan Minor.  When a small town sheriff encounters a beautiful ghost being held in servitude by a twisted Sin-Eater, he challenges the black-hearted villain for her very soul. A gem of tale wonderfully executed.

Next up is Barry Reese’s “The Mechanical Heart: a Tale of Julia Holst and the Weird West,” which immediately wins him the prize for the anthologies longest title. Julia is a woman who seeks out mysteries and in a small mining town she runs into a truly unique being; a robot vampire named Timothy. Reese’s tale is cleverly set forth and totally avoids the kind of clichéd pitfalls such a plot would invite.  Instead he delivers a brilliant story that is by far one of the finest he has ever put to paper.  It alone is worth the price of admission.

Writer Ed Erdelac’s “The Alkeldama Dig,” is the most horrific entry as it tells the story of a miner offered five thousands to dig into a rich man’s grave from beneath it to claim a valuable deed.  Instead of wealth, the hapless fellow finds a treasure of monstrous evil at the end of his tunnel.

“Mummy Train,” by James Palmer is a rollicking action packed yarn that takes place on a train and has a gunfighter and magician joining forces to combat a group called the Cadre set upon stealing ancient Egyptian artifacts being transported on the train. In the process a mummy is revived and does battle with a mechanical man which had me envisioning scenes from old Universal Monster movies.

Still, this is the third story out of six in which a humanoid automaton appears and that is bothersome.  We would have preferred Editor Palmer be more selective in his choosing entries and not repeat the same themes.

Finally the book goes out with a whopping bang in writer Joel Jenkins’ “The Eye of Ulutoh.”  This features Jenkins’ highly popular Indian occult fighter, Lone Crow as he and a female gunfighter, aboard a Costa Rican steamship, fight an otherworldly monster from the ocean’s dark depths.  It’s a colorful, well written story that had us wanting to find more Lone Crow tales.  Clearly our second favorite in the colletion.

STRANGE TRAILS is, like all such anthologies, a mixed bag but we’ve no hesitation in recommending it as all six stories are competently crafted and totally entertaining.  Now isn’t that the purpose of any book?  Kudos to Mechanoid Press and we do hope there will be future volumes of these weird westerns yarns.