THE BREACH TRILOGY by Patrick Lee 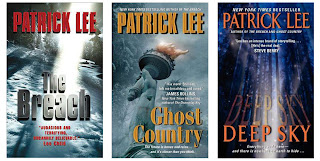 In these days of overhyped, over-marketed, multi-volume mega-series, it's hard to find a series of novels that truly justifies their existence. It's all about branding and stretching stories out to 1000s of pages for purely economic reasons is, sadly, the norm these days.

Patrick Lee's incredible Breach trilogy is the exception to the rule.

In three of the best edge-of-your-seat thrill rides this reader has ever had the pleasure to read, Lee gives us a New Pulp trilogy for the ages. The novels are The Breach, Ghost Country and Deep Sky and all three are lean, mean, thrill machines you do not want to miss.

But enough hype. What is this rollicking trilogy about?

In the first novel, The Breach, we are introduced to ex-con, ex-cop Travis Chase who is seeking to escape his past and find solace in the frozen, isolated wastes of Alaska as he tries to decide what to do with the rest of his life. That answer comes unexpectedly when he stumbles upon a unmarked 747 that crashed in the frozen wasteland just days before. To his surprise, no one has reached the wreck despite clear weather and the proximity of the crash to the nearest town. Added to this mystery is the discovery that the survivors of the crash have been tortured and killed, including the First Lady who has left a note providing the location of the torturers but also desperate instructions for whoever finds it to kill not only the torturers but also the two remaining surviving passengers. Chase heads to the scene but instead tries to rescue the two prisoners, a man and a woman. In a great action sequence, he fails to save the man but manages to save the woman who is critically injured during the battle.

The woman, Paige Campbell, it turns out, is an agent of Tangent. Their goal is a simple one. They are trying to save the world. Not from a terrorist plot, or from some unseen enemy representing a shadowy, potential threat to the US or democracy. No, they are literally, trying to save mankind from ultimate destruction.

Destruction by whom? Ah-ah. That would be telling. But I will tell you this: Tangent agents are trusted to guard, examine and study, The Breach, which is a form of wormhole that resulted when a particle collider was tested back in 1978. Since that time, items have been appearing on our side of the breach, items sometimes mundane, often unfathomable, and often deadly dangerous with strange properties and powers. Are they from the future? Another dimension? Are they the prelude to alien invasion? No one knows. Called Brach Entities, the good guys need to keep these items away from the bad guys.

That's the set up and I'll leave the first novel here so as not to spoil the action. And there is a ton of great action in this first installment despite the novel being somewhat hampered by the need to introduce the above premise.

The action picks up in the next novel, Ghost Country, which is the biggest and boldest entry in the trilogy. This one kicks off with the President's motorcade being taken out. Now such a sequence would normally be the climax of a great action tale but here Lee begins the tale with this breath-taking action. And it's an indication of the action that is to come. Campbell, with mere seconds before capture, must get a message to Chase telling him to retrieve a Breach Entity similar to the one lost in the destroyed motorcade. Chase, who has left Tangent and Campbell for compelling reasons set down in the first novel, has no choice but to re-involve himself with Tangent and the Breach and sets out to find this second artifact.

This device turns out to be a means for the user to jump ahead 73 years into the future - a future where mankind has been wiped out by a Breach entity. To reveal more would be to spoil the biggest, boldest, grandest entry in the series.

Put simply, once you pick up Ghost Country you will not put it down. It is filled with trips through time, government conspiracies, action galore, heroism and sacrifice and enough left over to set up the third and final novel.

Deep Sky is much smaller in scale and tone although the main mystery remains intact and there is still tons of action. Reading it after Ghost Country, however, may seem like something of a letdown because of this scaling back and, really, there is only one thing that can elevate the work: and that's the revealing of what the Breach is while wrapping up the various plot threads. The world is still ticking down to destruction and here the baddies are taking out anyone associated with the Breach and this is all compelling stuff. But it's the secret of the Breach that will either make or break the book after the compelling first novel and the exemplary Ghost Country. I, too, was somewhat taken aback by the approach in Deep Sky. Don't get me wrong, as a standalone work, it is an action thrill-ride but after Country the action paled somewhat even though I was still feverishly turning pages.

This brings us to the secret of the Breach itself. No, I'm not telling. It would be a crime to spoil the fun for readers. Here Lee is faced with the problem of all mystery-driven fare: how to come up with an explanation that will wow readers who have had the time, over the course of the previous two novels, to theorize and come up with their own explanation for the ultimate secret. Obviously it is impossible to satisfy every reader in this situation. As for this reader, no stranger to this type of story, the reveal blew my mind. I never, in a million years, saw it coming and it truly surprised me. All in a good way. That said, and for the reasons stated above, your mileage may vary when Lee draws back the curtain. All I can say is that it worked for me and I was left in awe after reading the last page. Needless to say I've got an eye out for the next Patrick Lee book. The Breach trilogy is simply brilliant.

Story aside, a word about the presentation of the work is in order. Spread over three novels, the 1168 pages of the trilogy could just as easily been presented as a single, large work and shelling out for three novels might put some readers off. However now that all three books have been released, readers can avoid the frustration of being left hanging while awaiting the next installment. This is a series you will want to devour. The books are available for Kindle but, given that these are released by mainstream publishers (Harper Collins) the ebooks are ridiculously overpriced and are actually more expensive than printed copies. But they are an option for those who prefer reading that way.

For me, the money I spent on the Breach trilogy was money well spent. I was glued to my chair, slicing my fingers to shreds turning pages long past bed time. Some of the best New Pulp writing on the market today. I loved it!

ANDREW SALMON – is one of the finest New Pulp writers in the field today, having won the Pulp Factory Award for Best Short Story of 2009.  He resides in Vancouver, Canada with is wife.
Posted by Ron Fortier at 5:28 PM

Damn! I picked the first two of these in a second hand bookshop this weekend and put them back. Now I'm kicking myself.

Wow. Well, maybe its not too late to go back and find them, Rick. Good luck and let us know what happens.

I called that store and the owner agreed to hold them for me. That's the first two and she will be on the look out for the third for me. I will drive up there the end of the week to get them. Thanks for the review. They sound good.

Started THE BREACH. You were right.oceanc 4753

Your summaries have several errors. ..


Ghost Country did not open with an attack on a Presidential motorcade... it was an attack on a Tangent motorcade ORDERED BY the President. Also, the world of the future was not destroyed by a Breach entity, but by man-made means. Also, the plot of Deep Sky deals with the destruction of the ENTIRE population of Earth, so I feel that you are incorrect in describing the situation as being scaled down, seeing as several thousand people survived in Ghost Country...