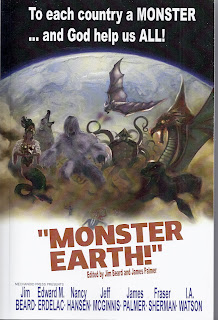 Talk about hitting a homerun your first time at the plate, this book does just that.  It is the first title from writer James Palmer’s new company, Mechanoid Press, and it is a pure joy for monster junkies of all persuasions.  Working with co-editor, Jim Beard, what the two have done is created an alternate world where giant monsters appeared just prior to the outbreak of World War II.  Then, in various stories by their colleagues, the effects of their presence is made known throughout the history of the next thirty years.

Thus the theme of the collection is to answer that question, “What would our world be like if all those movie monsters like Godzilla and all the rest were real?”  Aiding Beard and Palmer answer that question are five other talented monster-lovers providing us with marvelous tales of sheer unadulterated imagination.

“The Parade of Moments,” kicks everything off with Jim Beards relating old man’s memories his days as a newsreel cameraman.  He was in China during the height of the Japanese – Chinese conflict in 1937.  It was his good (or bad) luck to be on the scene with the first giant tentacle demon appeared under the command of the Japanese.  Later, in Shanghai, he films the arrival of the gargantuan Foo Dog monster of Chinese myth as it does battle with the enemy sea monster.  This is where the world changes forever.

Writer I.A. Watson picks up the thread with his “The Monsters of World War II, or, Happy Birthday, Bobby Fetch.”  You have to give some applause for that title alone.  The story takes place in Hawaii on the morning of Dec. 7th, 1941 and the attack on Pearl Harbor by Japanese forces; this time aided by their giant squid-like sea creature.  Young Bobby Fetch, newly arrived with his scientist parents befriends a beautiful young girl who teaches him the myths of the Hawaiian dragons.  Giant winged monsters devoted to protecting the islands and their people.  The boy soon learns all true heroism comes with a cost.

With the end of the war, countries find themselves having to lock up their monsters, such as the American fur covered beast called Johnson in Jeff McGinnis’ marvelous entry, “The Beast’s Home.”  Military authorities keep Johnson imprisoned in Los Angeles because of its being on the west coast.  When the monster breaks free on several occasions, wreaking havoc and great loss of life, the city is soon abandoned by the movie industry and becomes nothing more than a gilded ghost town.  This was our favorite story in the book.

“And A Child Shall Lead Them,” brings us into the 1960 where writer Nancy Hansen tells of a giant Snake Goddess from India who chases a false guru to the shores of Boston attempting to reclaim what was stolen from her.  When the U.S. Military unleashes its own monster, a giant Thunderbird, a battle royal ensues that threatens to completely destroy the Hub City unless a teenage boy and old derelict can soothe the savage behemoths with their ancient folk-music.

Edward M. Erdelac continues this Native American thread with his “Mighty Nunuq,” a giant polar bear connected to the Inuit people of the frozen north.  But once again, all such supernatural beings demand sacrificial offerings.

Fraser Sherman’s sixth entry, “Peace With Honor,” is set in the last days of the Vietnam War with both sides using monsters to not so much to win as to find a honorable exit to the conflict that so ravaged both sides.  Thus the North Vietnamese unleash their giant bat-monster the Shrieker who must battle Junior Johnson, the offspring of the famous L.A. monster used to defeat the Japanese in World War II.

The unifying thread that moves through all these stories is used to maximum advantage here as each new story builds on the foundations set by the others thus world-building a very believable Earth and its horrifying history.

Co-Editor James Palmer wraps up the book with “Some Say in Ice,” which is the most exaggerated, bombastic, over-the-top fishing story ever told.  American monster scientists head to the frigid arctic waters to capture an illusive sea creature few have ever seen.  How they go about this is fantastic and wonderfully captures the true core of “Monster Earth.”  It’s a grand send off and left this reviewer applauding soundly.

“Monster Earth” is what New Pulp is all about.  It’s fresh, original, with a tip of the hat to those old black and white cinema thrills we all enjoyed as youngsters.  If this book doesn’t have a sequel, then there’s something really wrong with this Earth. Go get it now…before the monsters get you!

Dang it! I only just got hold of my copy of THE BREACH. Now you give us another good review of another good story. Blast!

"Gilded ghost town." Damn, I wish I would have thought of that phrase. :) Thank you so very much for the kind review!

Hey, you are allowed to read more than one book at a time! Monster Earth is marvelous.

Ha, I expected this review would generate a few comments. Rick, just doing my job, letting good folks like you know when really fun stuff shows up from little publishers. Jeff, your story was so much fun to read. Great job. Will be looking fro more of your work in the future.

Got the Kindle edition thank you very much.