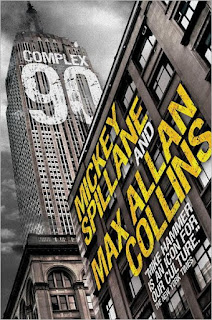 Beginning a new year with a new Mike Hammer novel is a cause for jubilant celebration.  In his short preface to the book, begun by the late Mickey Spillane, Collins informs us that the setting is 1964 and “Complex 90” is in part a sequel to the 1961 Mike Hammer novel, “The Girl Hunters.”  For those of you unfamiliar with that private eye classic, a brief summary is in order.

“The Girl Hunters” opens with our down-and-out hero discovering that his secretary, and one true love, Velda, has returned from the dead.  Having lived in an alcoholic haze since her disappearance seven years earlier, he learns that Velda had been on a spy mission for the government, captured by the Russians and thrown into one of their of their prisons where she had endured physical tortures until managing to escape.  Now back on U.S. soil her ordeal is far from over as the Soviets send a specialized assassin team to terminate her permanently.  Instead they run into Hammer and it he who does the exterminating.  You can easily enjoy “Complex 90” without having read “The Girl Hunters,” but why on earth would you settle for one great Mike Hammer book when you can enjoy two?

Okay, back to this “sequel” of sorts.  The cold war is still in full tilt, even though Hammer and Velda have slowly gotten their lives back on a normal track.  Then an old colleague recruits Hammer to assist him as a bodyguard for a controversial senator throwing a lavish cocktail parting in his New York penthouse.  Hammer sees it as an opportunity to make a few fast bucks.  In the middle of the soiree, an assassin attempts to shoot the senator but instead guns down Hammer’s pal. Hammer takes a slug to the leg before sending the killer through a window eighty stories up via a hot lead tivkry from his .45 automatic.  So much for an easy few dollars.

Suffering only a flesh wound, Hammer is soon back on his feet.  Immediately he is offered a new assignment; that of bodyguard to the senator during his fact-finding junket to Moscow. The senator wants Hammer to replace his dead friend who was scheduled to accompany him.

No sooner are the two in Russia then Hammer is arrested and imprisoned by the KGB for being a spy.  Fortunately for the savvy P.I., they detain him in a city facility and he waste no time escaping, leaving half a dozen bodies behind.  By the time he makes it back to the States, he’s left a trail of forty-five dead Russians creating an international incident.  Now the Russians are clamoring for his hide and the State Department isn’t any too pleased with the notorious New York private-eye.  What bothers Hammer is why he was kidnapped in the first place and why the Commies are so hell bent on bringing him back to the U.S.S.R.

Finding the answers to those two questions is the major plot around which this fast paced thriller revolves and like all Mike Hammer tales, there’s plenty of two-fisted action along the journey.  Collins prose never lets up for a second propelling this reader to a slam-bang climax that had us needing a drink when it was over.  Cold war intrigue, sexy femme fatales and in the middle of it all, one tough son-of-bitch throwback whose conservative patriotism will not be shaken by gun-toting foreign agents or two-faced  Washington politicians.

In a time of when America is being torn apart by a culture war, Spillane’s Mike Hammer is a cleansing storm that makes no excuses for loving ones country and doing whatever it takes to keep her strong.  Makes us wish we had a lot more like him.
Posted by Ron Fortier at 5:20 PM

I've never read the novel THE GIRL HUNTERS but I've seen the movie about four or five times on Turner Classic Movies and I recommend it highly. As far as I've been able to find out, it's the only movie ever where a writer plays his own character. Unsurprisingly, Mickey Spillane does an excellent job of playing Mike Hammer.

Yup, you got it, Derrick. In fact, Collins suggest in his intro to this book that if you've seen the film, one should imagine Spillane's image as Hammer while reading COMPLEX 90.
Ha.