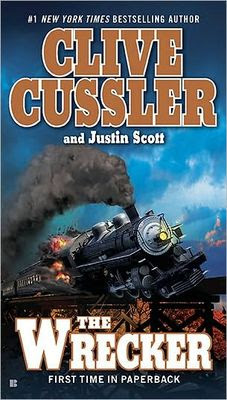 Ron, will you next be telling us there is no Santa Claus?
Thank you for the authors name, I will be looking for his books now!

At least the Tom Clancy books have given up on this system. Though Clancy's name is far larger than the actual author, they do put who actually writes the book on the cover.

Nick, you misread what I wrote here.
Cussler's book DO show the real writer...exactly as Clancy's books do, but in much-much-much smaller type.
This is still wrong and Clancy is just as guilty as Cussler. Look at the cover for the book on this review...Justin Scott's name IS there.
The books should have the real author's names in bold...with a small tag to the effect "Based on characters created by Tom Clancy...or Clive Cussler." Now that would be honest.

Thanks Ron Fortier for authors, I will see soon.

I've read the next Bell novel: The Spy. It, too, is pretty good.

There is a sort of formula to the Bell series. We usually don't know who the main villian until later on (we may find out is IDENTITY just before Bell does, but that's not the same thing). And there is usually a follow on epilogue set later in Bell's life at the end.

I look forward to reading "The Race", the next one, when it hits paperback.

Hi MB, I do have THE SPY and hope to get to it before the year is out.
This is a fun series and Scott does a great job with. Will also be on the lookout for THE RACE when it hits the paperback market.