STRANGE GODS OF THE DIRE PLANET 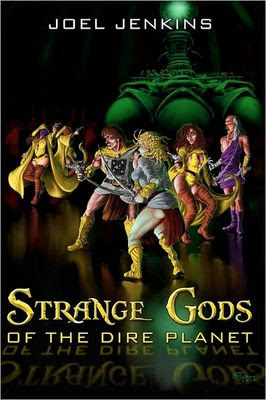 STRANGE GOD
OF THE DIRE PLANET
By Joel Jenkins
Pulp Work Press
263 pages
Writer Joel Jenkins is one of the most prolific, exciting and talented members of the New Pulp movement today.  Through his association with Pulp Work Press, an outfit he started with fellow writers Joshua Reynolds and Derrick Ferguson, Jenkins has produced some of the most amazing, fast-paced pulp adventures ever to hit print.  The originator of several series in various traditional genres, STRANGE GODS OF THE DIRE PLANET, is the fourth book in this homage to Edgar Rice Burrough’s classic Martian books.
Having not read the previous three, I really appreciated Jenkins’ understanding that new readers would need a little extra background exposition to bring them up to speed on where the action was taking place and who all these characters were; while at the same time moving the story along at a breakneck pace to satisfy those fans who had been along for the ride from the beginning.  That he accomplishes this wonderfully is no small achievement and a big reason I enjoyed the book so much.
Here’s what any new reader will learn upon entering Garvey Dire’s world.  Dire is a modern NASA astronaut who, by some cosmic snafu, had his space craft hurled through an anomaly that sent him back in time millions of years to a Mars inhabited by humans like himself and all manner of beasts and fauna.  Realizing this is a one way trip; Dire accepts his fate and sets about making a new life for himself amongst the female dominated tribes of the giant red planet.  Jenkins has created a truly exotic social background that is fascinating with paying scrupulous attention to what each of these customs means to the entire culture he has created.
On Dire’s Mars, men are in short supply so they are protected and treasured and it is the abundant female sex that handles the affairs of state, commerce and warfare.  Obviously this is a different world than Dire is comfortable with, especially when adapting he realizes he must accept polygamy and marry several women to assume an active role in this society.  Like Burrough’s books, Jenkins’ Martian civilization is crumpling and the population struggling daily against both the forces of nature and time to survive.
The crux of this fourth volume centers about a long kept secret of an occult group of fanatics known as the Technopriests and Dire and his allies attempt to uncover it.  There is bloodshed galore, non-stop action and great heroic characters battling against truly beautifully crafted background.  It also ends on one of the most dramatic cliffhangers this reader has ever encountered.  Over the many years since Burroughs created his interplanetary pulp classics there have been dozens of imitators who have attempted to recapture the magic he wielded but none has ever come as close as Jenkins with the Dire Planet books.  These books are rock!
Posted by Ron Fortier at 9:58 AM