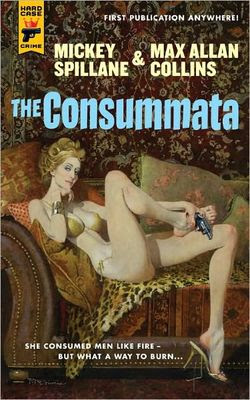 THE CONSUMMATA
By Mickey Spillane & Max Allan Collins
Hard Case Crime
247 pages
Release Date - 4 Oct. 2011
In 1967 popular mystery writer, Mickey Spillane, sought to cash in the James Bond spy craze sweeping the world of literary fiction.  He created a Florida based government agent named Morgan the Raider; obviously referencing the famous pirate with the same name.  The book was titled THE DELTA FACTOR and the plot revolved around Morgan and a beautiful female agent, Kim Stacy, going to a South American island to rescue a scientist being held by terrorists.  Spillane had begun work on a sequel when THE DELTA FACTOR was made into a rather bland, lackluster movie in 1971 and disheartened by that film; he shelved the new book and never completed it.
Forty-four years later, thanks to Spillane’s good friend and protégé, crime novelist, Max Allan Collins, fans can now enjoy that sequel, THE CONSUMMATA.  The story takes places only a few months after the events in the first book, with Morgan now a felon having been framed for an armored car hold up that netted the thieves forty million dollars.  Although innocent, the only way he can prove his innocent is to find the stolen loot and return it, all the while eluding both local and government agents.
As if that isn’t trouble enough, he finds himself entangled with a group of Cuban exile patriots living in Miami who have become victims of a lowlife named Jamie Halaquez;  a spy for dictator, Fidel Castro.  Halaquez has stolen the rebels’ war chest containing seventy-five thousand dollars; money intended to fund the group’s activities and help other refugees flee Cuba.  Owing them a debt of honor, Morgan volunteers to find Halaquez and return their money.
Less than twenty four hours later, a bomb destroys the hotel room in which Morgan was to have set up his base of operations.  Only through a sixth sense honed through years of espionage work does Morgan avoid being killed but at the same time is made aware that there is another spy in his new circle of friends.  Now things are really complicated, in a very deadly way.  At the same time he is playing detective in the seamy world of Miami’s sex clubs, unknown killers are dogging his trail.
THE CONSUMMATA is a typical pedal-to-metal Spillane thriller that zips along at a fast, gut tightening pace filled with lots of sexy and dangerous women and a true exotic mix of colorful supporting characters from both sides of the law.  There are always a few critics who will claim they can discern where Spillane left off and where Collins took over the yarn. This reviewer is happy to say he is not one of those.  This is a seamless adventure that moves smoothly from chapter to chapter with one clear and exciting voice, echoing the bullet-blasting tales of a true Mystery Grandmaster.
Posted by Ron Fortier at 9:36 AM

Yet another great looking book I will have to add to the already large pile to read!