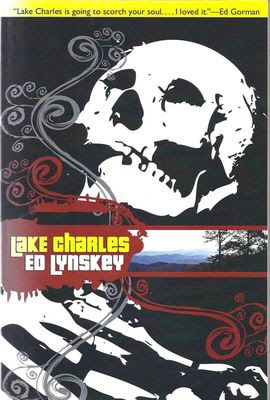 LAKE CHARLES
By Ed Lynskey
Wildside Press
191 Pages
Availablen July 2011
One of the hallmarks of classic pulp noir fiction is a protagonist over his head in a convoluted life or death dilemma.  In “Lake Charles,” Ed Lynskey has invented such a figure in Brendan Fishback.
Brendan is out on bail, after being implicated in the drug overdose death of a lovely young lady named Ashleigh Sizemore, daughter of the wealthiest man in Umpire, Tennessee.  To help get his mind off his problems, his best friend, Cobb Kuzawa, suggest they go fishing on secluded Lake Charles up in the mountains. At the last minute Brendan’s twin sister, and Cobb’s ex-wife, Edna, decides to tag along. She harbors some hope she and Cobb can reconcile.
Friction between Edna and Cobb threatens to ruin the trip. Then Edna mysteriously disappears without a trace, after having zipped across to the other side of the lake on her jet-ski. Frantic to find her, Brendan and Cobb begin combing the lake on their small one man bass boats. When that proves fruitless, they begin searching the lake’s perimeter on foot. Things get decidedly worst when they are attacked by gunmen who are growing marijuana in the surrounding backwoods fields and glens. They fight back; killing one of their assailants in the process and their untenable situation continues to escalate, pulling them along to even deadlier encounters.
Lynskey’s stacks his deck with brutal characters, both good and bad, each trying to escape a lackluster existence.  Brendan is a rudderless soul, cast adrift when his father, Angus, deserted the family and wandered up to Valdez, Alaska to work on the oil pipeline. His own job at the local printing press is a boring, dead end and he dreams of following his father’s trail to a better place until his drinking and pot smoking put him in the extreme wrong place at the wrong time.  Ultimately he comes to suspect Edna has been kidnapped by the men growing the illegal weed and his only hope of saving her lies with Cobb’s eccentric, Korean vet father, Mr.Kuzawa.  Mr.Kuzawa is a John Wayne take-no-prisoners type and the second he enters the story, the action and suspense rev up to maximum overdrive.
As Brendan and his gun-toting mentor crisscross the rural Tennessee landscape, bodies start dropping.  What surprises the confused lad is in the midst of their violent Odyssey, clues are uncovered that connect Ashleigh’s death with the mysterious crime kingpin controlling the county’s drug trade. Are Brendan and his sister only pawns in a much bigger game? And if so, we’ll he survive long enough to find Edna and uncover the truth? Or will he fail and become another unexplained mystery surrounding the foul waters of Lake Charles?
“Lake Charles” is a gripping, crime thriller that portrays a world of tough, desperate people and creates a suspenseful mystery that will have you guessing to the final page.  The genius of the book is that its messy image of the world is a whole lot closer to reality than most of us would care to admit.  Brendan Fisback is someone we’ve all met before, maybe when looking in the mirror.
Posted by Ron Fortier at 3:52 PM

Could I have a moment of your time? If so, drop me an e-mail at j dot e dot badelaire at gmail dot com.

Is this a new novel? Or a reprint?

Oops, my bad here, Duane, sorry. The book is brand spanking new, in fact it hasn't even been release yet. That happens in July.