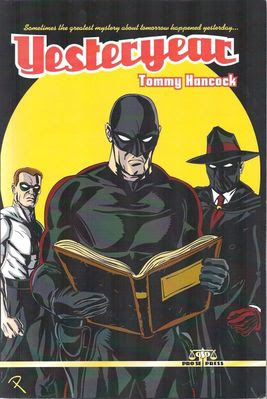 YESTERYEAR
By Tommy Hancock
Pro Se Press
180 pages
One of the most widely recognized facts regarding American comic book heroes is that they actually evolved out of the Depression Era pulp magazines.  Fans of both media are well aware that the likes of Batman and Superman were the literary children of characters such as the Shadow and Doc Savage.  Tommy Hancock employs this historical theory against which to set his first novel, “Yesteryear.”  Hancock, the winner of this year’s Pulp Ark Award for Best New Writer, had earned that title based on his short fiction. Now with this novel length drama, he cements that position soundly with a work of deft imagination heralding past days of American glory.
J.C.Smithernson is a one time crime fighting boy detective who has grown up to become a writer and publisher.  He has put his hero days behind him, though his good friend, Detective Donovan Bradley, suspects he still harbors longings to get back into the fray.  Then one day a mysterious package is left on Smitherson’s steps containing the journal of newspaper man, Ramsey Long, who was part of the Golden Age of Heroes back in the 30s and 40s.  Thought to be a myth, Ramsey’s musings are said to be a tell-all book that honestly rips aside the veil of public relation mumb-jumbo to detail the true history and exploits of those early mystery men and women.
Which is why when it is learned that Smitherson possesses the book, factions both political and private, begin targeting him and his loved ones to guarantee the journal never sees the light of day.  For J.C., it is an eye-opening revelation that some of the people he once admired are flawed enough to want to destroy him rather then have their human failings exposed publicly.  Still, he is determined that the truth will be told regardless of the consequences.
“Yesteryear,” is a marvelous homage to all those great pulp characters and golden age comic heroes who followed in their footsteps wonderfully told with a true sense of time and place.  Hancock knows his history and the richness with which he paints the times adds much to the books plot and appeal.  So on a purely literary basis, I recommend this book highly, it was tons of fun to read.
But I do have one criticism and it deals with the book’s packaging, not the story.  I don’t often make mention of actual production values but in this case felt compelled to do so because in the end, it did lessen my overall enjoyment of “Yesteryear.”  Hancock is also the book’s producer and he’s filled many of its pages with some truly fantastic drawings of many of the fabulous characters described in the text.  All to the good.   Alas, that’s where his design musings should have stopped.
Instead he also chose to change the fonts and styling of the text throughout the entire book so that the reader is confronted with bold type, cursive scribbles, light, thin fonts constantly changing, many difficult to adjust to after finishing a chapter presented in an entirely different way.  I understand the concept he was trying to achieve with this mixing, but it does not work and instead becomes a physical flaw to an otherwise stellar offering.   Hopefully his next book will have a more conservative presentation.
Posted by Ron Fortier at 2:58 PM

I'm sure you'll enjoy it Tim. And as it is the first of a proposed series, always a good thing to get in on the ground floor. As ever, thanks for stopping by.

But, for me, the changes in fonts & stylings was never a problem. As the work was obviously one where some sections were reprints from newspapers, others journal articles, etc, the font changes made that clear.

What I was more bothered by was the areas that didn't get explained. We are given the origin of one character, but someone else is using that identity later, so was he replaced? Then there was another character who was kind of introduced in one story, but when we met him later, he's different and we don't know why or what he's doing or why.

As a first novel, MB, I expect a few such bumps in the story but suspect lots of these were intentionally left out for the sequels now in production. And as stated in my review, the mash up of fonts was very disruptive to my reading experience. Hopefully we'll see a much more uniform approach for book two.