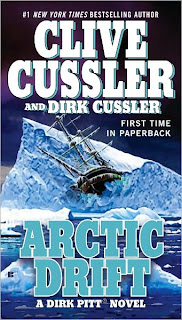 Once again civilization is on the brink of collapse. Global warming is increasing to the detriment of the environment and all life on the planet. When an American research scientist discovers a way to artificially create photosynthesis, the process by which plants transform harmful carbon dioxide into oxygen and water, a glimmer of hope is found. But this amazing planet saving solution depends entirely on a rare mineral known as ruthenium which then becomes the treasure target of an unscrupulous Canadian businessman who controls most of the gas and oil production in the northern latitudes.

Through the use of government bribes, murder and extortion, this greedy megalomaniac is willing to let mankind face global destructions rather than give up his bloody wealth.
He devilishly orchestrates a conflict between Canada and America which soon has both suspecting the other of harboring militaristic goals. Into this convoluted plot of evil twists and turns arrive the brave men and women of NUMA, the National Underwater and Marine Agency, led by Dirk Pitt; the most popular pulp hero of current literature.

Created in 1973, Dirk Pitt and his NUMA crew have traveled the seas of the world battling some of the most colorful villains ever invented all in defense of mankind and the world. It is no wonder that ARTIC DRIFT, their twentieth outing is a big, fat, rollicking adventure set against the topical themes of global warming and the world’s oil and gas addiction. Leave it to a master storyteller like Cussler to inject a real world crisis into an over-the-top thriller that had me whipping through the pages non-stop. There is plenty of action, death-defying escapes from impossible traps and an ancient sea mystery to be solved before the final chapter is closed.

This is also the third collaboration between the senior author and his son, Dirk, who shares the same name as his dad’s enduring hero. I have no idea what their routine is like but Dirk Pitt fans should take heart that their seamless prose melding should herald the continuation of the series long after Clive hangs up his thesaurus. And that, for pulp fiction fans, is the best news ever.
Posted by Ron Fortier at 5:47 PM

Actually, I didn't find this one as enjoyable as prior Dirk Pitt novels (or even Cussler's other series). The villian and the menace just didn't seem, I don't know, worthy of Dirk Pitt et al.

Sadly one of the pitfalls (oooh...that was bad..sorry) of a series that is this old. And I actually missed picking up the book before this one, Treasure of Khan, which I've since remedied and will get to eventually. Thanks for stopping by as always.