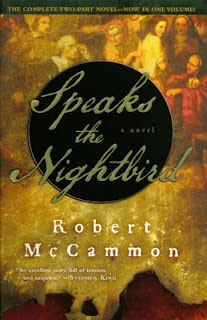 Those of you familiar with this column will be aware that I’ve already reviewed the first half of this book. This strange chain of events came about when I’d purchased the paperback edition which contained only the first half, sub-titled Judgment of the Witch. At the time I bought the book, I was unaware it was incomplete. Again, I don’t want to retread old ground here as in that initial review I made my displeasure very clear to one and all. Here was a book I enjoyed immensely and was now forced to seek out its second half.

Several attempts to order on-line proved fruitless and I invariably resorted to visiting a local Barnes & Noble to order part two; Evil Unveiled. As it would turn out, the store clerk screwed up my request and put in a order for the trade paperback version which contained the entire novel! And they let me have it for the price of the smaller paperback. Amazing. So I came home with this volume and promptly took the incomplete paperback and threw it in the trash. Again, a pox on the publisher for releasing such a great read in so ridiculous a fashion.

That said, the remaining half of the book is just as powerful and the first. Young legal clerk Matthew Corbett is frantic to save innocent Rachel Howarth from being burned at the stake for witchcraft. Convinced there is a criminal mastermind plotting to destroy this new colony town, Matthew gambles everything, including his own future, in a desperate gamble to save the woman and unmask the true villain.

McMammon is one of the finest American writers working today. He breathes such life into this pre-American world of those struggling early colonists who daily wrestled a hostile, frontier environment to make a new world for themselves. His research is remarkable the cast of characters rich and captivating. SPEAKS THE NIGHTBIRD is the first in a new series from this talented tale-spinner and you should not miss it. But please, once more. Make sure you buy the complete novel and don’t go through the hell this reviewer traveled to finish it.
Posted by Ron Fortier at 2:02 PM