SOMEBODY OWES ME MONEY 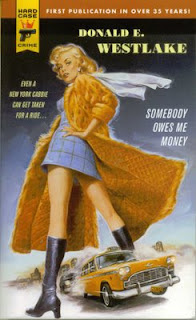 Veteran crime writer Donald E. Westlake can write gripping, tough stories with the best of them. Hell, he is one of the best of “them.” But then again he can whip up a dandy mystery, infuse it with his own unique brand of humor and have you laughing out loud in no time flat. Such is the case with this comedy about a New York City hack named Chet (he despises Chester) Conway who, in one turn of destiny’s wheel, goes from being a lucky gambler whose horse came in to a desperate murder suspect hunted down by two very dangerous criminal gangs.

Chet’s long shot nag wins him close to a thousand dollars. A nice pay-offs for a fellow use to winning and losing tens and twenties. Believing his ship has finally come in, he arrives at his bookie’s apartment only to discover the guy has been shot to death and his money swiped. Chet does the right thing and cooperates with the police but that doesn’t stop two rival mobs from believing he’s somehow involved and is now a liability to their organization. Enter the dead man’s sister, a lovely, vengeance obsessed blonde named Abbie, (she despises Abigail) and suddenly Chet is not only scrambling for his life, but now he’s teamed up with a tough-as-nails beauty with a habit of attracting trouble.

By the time a bullet creases his skull, sparing his life by inches, our hero starts to wish he’d never made that bet in the first place. Caught in the middle between the gangs and the cops, with an unknown killer after him, our stalwart cabbie must become the hero and solve the murder or become the next dead body.

The laughs come as fast as the bullets in this gem of a mystery and the poker-game climax had me marveling at the cleverness of Westlake’s plot. This is just plain mayhem fun from a master story teller. Give yourself a treat and pick it up.
Posted by Ron Fortier at 9:07 AM

I enjoyed this book quite a bit, but was surprised to learn that it was written in 1969. It really feels like a '50s era book.

It certainly had that feel, Glen. But the second Abbie shows up in her
boots and mini-skirt, you know doggone well this isn't the 1950s. Ha.

Have you ever read Westlake's DANCING AZTECS? One of the funniest books I've ever read involving a manic search in New York for a priceless golden statue. The problem is there's one real statue and half a dozen fakes.

DL, until Hard Case Crime came along, my crime reading knowledge
was limited to a handful of writers.
Thanks to HCC, I've discovered Westlake and others and am enjoying the ride big time. This DANCING AZTECS sounds wild and I'll certainly keep an eye out for it.
Thanks, pal.